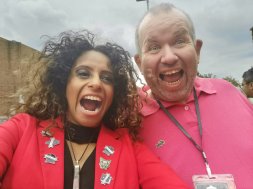 A film festival focusing on films about the paranormal, the unexplained and the supernatural has taken place in Gloucester

Take the trail to sustainability!

Fancy a family-friendly walk or bike ride – and some interesting practical sustainability to see, do and chat about?

The tenth Cotswold Art & Antiques Dealers’ Association Fair (CADA) is being held for the second time at Compton Verney Art Gallery and Park in Warwickshire CV35 9HZ this October.

The Holst Victorian House, Cheltenham, is delighted to present a special Holst Birthday Concert performance by the Cheltenham Symphony Orchestra on Saturday (September 17).

Turn Back Time as The Cher Show comes to Cheltenham

A production that tells the story of the “Goddess of Pop” is swapping the bright lights of Broadway for the rolling hills of Gloucestershire this week.

What do a flock of sheep, a herd of Shetland ponies, a large marquee, live music and family fun all have in common?

The UK has gone through some of the hottest days on record but the Gloucestershire Warwickshire Steam Railway (GWSR) is already making tracks through the snow with its popular steam-hauled ‘Santa Express’ tickets now on sale.

Are you in the Carnival crowd?

There's a chance to relive five decades of Gloucester Carnival through a special exhibition of recently-discovered photographs, currently running at the Picturedrome in Barton Street.

Brewhouse & Kitchen has launched Hoppy Hour at its venues in Cheltenham and Gloucester.

Teaching staff, students and graduates from University of Gloucestershire will present their writing at the Cheltenham Poetry Festival featuring a 10-day programme of live literature events.

The Everyman Theatre, Cheltenham, has just announced its new programme for September 2022 – June 2023 and it’s packed full of unmissable events.

Celebrate more than 200 years of astounding inventions in Stroud

Stroudwater Textile Trust is holding two weekends of free heritage events in Stroud; home of textile innovations, the lawnmower, and the adjustable spanner.

Supported by its Patron HRH The Prince of Wales, the Tetbury Music Festival is just a few weeks away.

Watch a film for just £3 on National Cinema Day

Cinemas across Gloucestershire will be charging just £3 for tickets this weekend to mark the celebration of National Cinema Day.

Turn your eyes to the skies at Moreton Show

The men who broke the bank and lost the cargo are back!

Comedy duo Miles Jupp and Justin Edwards are set to reunite and embark on a tour of the classic Ealing Comedy, The Lavender Hill Mob.

Brave volunteers to go over the edge for local charities

More than 50 intrepid abseilers are steeling themselves for a 50-foot drop, in a bid to raise money for four popular local charities.

An Open Day due to have taken place at Gloucestershire Constabulary's headquarters in Quedgeley on Saturday (September 17) has been postponed.

Review: Driving Miss Daisy to the Barn Theatre in Cirencester

LodeFest - the riverside music festival - is back!

Is your child looking for a new aquatics sport? How about having a go at water polo?

Now in its 12th year, Gloucester History Festival, from September 3 to 18, attracts tourists from across the country to Gloucester for a week-long programme of talks and experiences.

Thousands of music fans are set to descend on Brockworth this weekend for the Witcombe Festival to see some huge acts.

Announcing Voices Gloucester - Our Living History Told By You

Celebrating the history, culture and identity of our city through the power of storytelling

Countdown to the Phoenix Festival

The Phoenix Festival team are counting down the days to the Cotswolds' largest free-to-enter, community-led music and performing arts festival!