University of Gloucestershire graduates Gail Taylor and Teresa Hogsbjerg have swum the English Channel in memory of two of their best friends.

The pair have raised thousands of pounds for Bowel Cancer UK.

Gail and Teresa lost one of their close university friends, Claire Stinchcombe, aged 30, to bowel cancer, then another of Gail's closest friends, Natalie Thomson-Humphris, died from the disease at the age of 31. 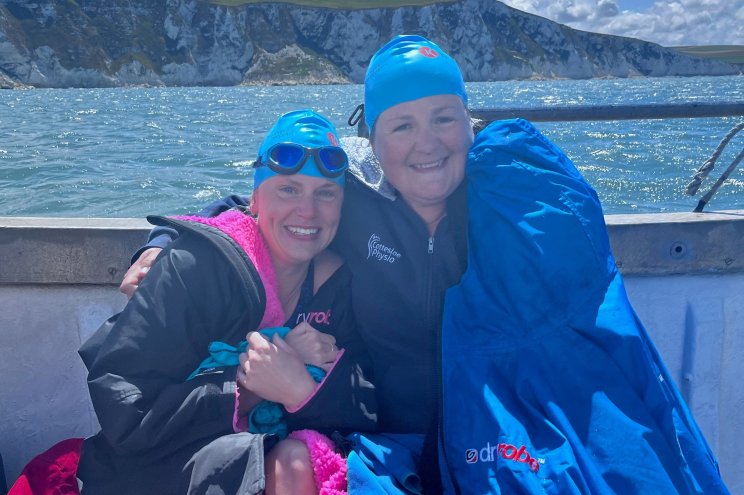 Friends for more than 20 years, after meeting while playing women's rugby at the university, Gail and Teresa decided they would swim the Channel together in memory of their late friends.

They were accompanied by the crew of a small fishing boat, who navigated them safely across the Channel, the world's busiest shipping lane.

With each swimming for an hour and then letting the other take over, Gail and Teresa reached the shores of France just over 15 hours after setting off from Dover - raising nearly £9,000 for Bowel Cancer UK so far.

Gail, a communications and media graduate who lives in Bedfordshire, said: "There was nothing in our heads other than getting to the other side. We always knew we would, because we could not let each other down.

"The friendship we have had over 21 years has taught us many things and this latest adventure taught us that anything is possible, and that teamwork makes the dream work.

"The memories of our friends who lost their lives to bowel cancer came into our thoughts many times on our journey across."

Encountering numerous jellyfish along the way, Gail and Teresa had to swim without wetsuits and through the night, to ensure their swim was officially recorded by an official from the Channel Swimming Association.

Teresa, who graduated with a degree in human geography and lives in Surrey, said: "This experience has been something we will never forget. We've spent years training for it, whilst managing our personal and professional lives to make this possible.

"We are so grateful to all those who have sponsored us and supported us in any way and helped to raise awareness about bowel cancer."