Carl Hester MBE, Imran Atcha, Malcolm Wharton CBE and Majeed Waris were each recognised for their significant contributions in education, sport and the community.

Leading British dressage rider and five-time Olympian Carl Hester MBE has been awarded an honorary degree in recognition of his extensive contribution to equestrian sport and education. Having produced many horses to Grand Prix level, Carl became the first honorary patron of British Dressage in November 2016 and is one of Britain's most successful dressage riders, holding 68 national titles.

An advocate of Hartpury's educational programmes and supporter of Hartpury's Equine Academy programme, Carl periodically trains students, as well as welcoming them to his yard for training opportunities. 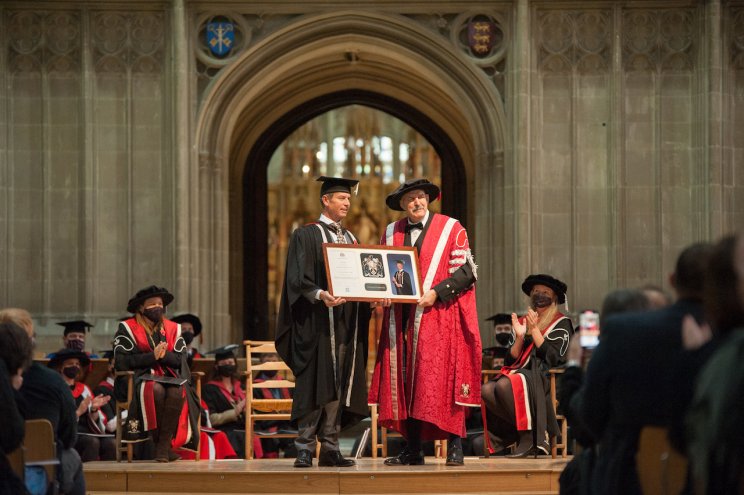 As a founding member of St James City Farm Riding School and manager of St James City Farm, Imran provides inner-city children with a taste of the countryside and access to affordable riding lessons. Imran's enthusiasm and passion for horses and animals and his determination to bring the benefits of the countryside to under-privileged children, particularly those from minority ethnic backgrounds, was recognised at the graduation ceremony.

Ghanaian international and professional football player, Majeed Waris, was awarded an honorary degree for his work in education and his local community.

Having grown up in Tamale, North Ghana, Majeed started his football career after being scouted by the Right to Dream Academy. Access to coaching, mentoring and programmes at the academy and eventually through a Hartpury scholarship inspired Majeed to provide more life-changing pathways for his local community in Ghana.

In 2014, The Majeed Waris Foundation was launched to provide material and financial assistance to aid health and education in Tamale Metropolis, Ghana. The academy now offers other young people and their families opportunities that otherwise may not be available.

Majeed Waris said: "My journey started in 2004 when the Right to Dream Academy scouted me. The academy was full of young boys working so hard to achieve their dreams or create a better lifestyle for their families.

"Through discipline, hard work and determination, I was assigned to captain the academy and eventually awarded a scholarship to Hartpury College. I am grateful for every moment I spent at Hartpury College, and the training and support I received helped me achieve my dreams.

"Through the Majeed Waris Foundation, I look forward to giving back to my community and supporting more young people in Ghana."

Former principal of Hartpury College, Malcolm Wharton CBE, was recognised for his contribution to education and Hartpury. Appointed to the post in 1990, he took Hartpury from 69 students to a thriving community of around 3,000 students on a range of equestrian, animal management, sport and land management programmes. By the time he retired in 2012, Hartpury College was graded outstanding by Ofsted.

Malcolm's wider contribution to the equine industry and sport is also significant. He is currently chair of the British Equestrian Federation, an honorary vice-president of the Riding for the Disabled Association, one of only five life members for Gloucester Rugby, a fellow of the Royal Agricultural Society and former director and council member of the RFU.

Rosie Scott-Ward, pro-vice chancellor of Hartpury University, said: "It was a privilege to be able to celebrate and recognise the achievements of these remarkable people at our graduation ceremony.

"The impact that Carl, Imran, Wasim and Malcolm have had on the lives of others is both commendable and inspiring, and the honorary degrees are hugely deserved.

"While these four individuals have had different life experiences and career pathways, they share a common belief with us at Hartpury; that education is a vital foundation for unlocking future opportunities.

"I'd also like to pay tribute to our students who graduated last week. We are so proud of the resilience and determination they showed in the face of unprecedented challenges owing to the pandemic. We sincerely wish them well for the future."