Four actors, one mystery...and no clue! A thrilling new comedy is currently touring round theatres, village halls and other community venues in Gloucestershire. 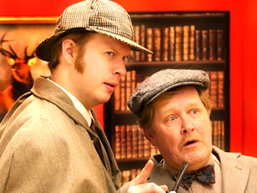 After the success of The Hound of the Baskervilles, and Dracula, Rain or Shine are dying to bring you yet another fantastic evening of entertainment with their own individual comedic style. The dynamic duo return to solve one of the Victorian era's biggest mysteries: Sherlock Holmes and The Curious Case of Dr Jekyll & Miss Hyde. 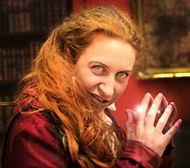 Join Sherlock Holmes, together with his trusty sidekick Dr Watson, and watch a case unfold that is less elementary, and more fantastical than ever before.

Hailed as "a delicious mirthfest", Rain or Shine will once again be reinventing the classic Sherlock Holmes characters using their now signature Morecambe & Wise-ish comedy style for another season of mystery, mayhem, but, above all, multi-role madness!

Set in authentic Victorian costume, with a cast of four playing a whole host of characters, Rain or Shine are sure to delight and enchant those new to the tale, and those who already know it.

The tour has already included sold-out performances in Brockhampton, Lea and Wotton-under-Edge, with upcoming shows at the following Gloucestershire venues: