Head to the Wild West this weekend!

Where: Brockhampton, near Cheltenham GL54 5XH

This year's Show at Brockhampton is the 73rd such event and is taking on a 'Country and Western' theme. 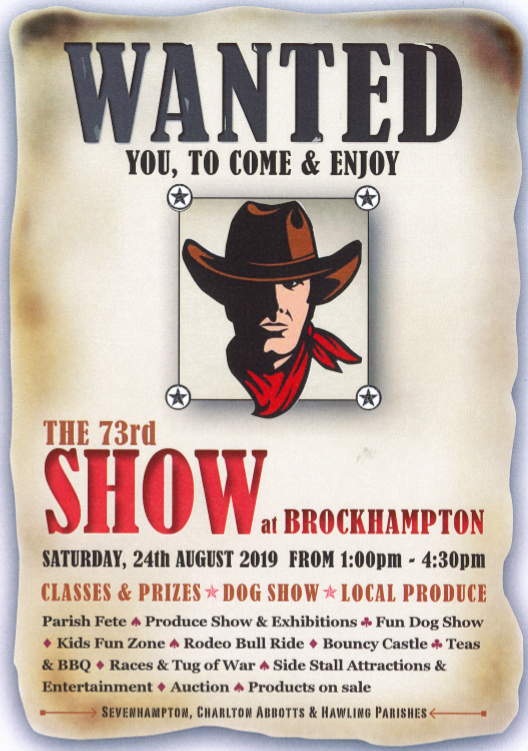 Residents of the parishes of Sevenhampton, Hawling and Charlton Abbotts pool together to stage the annual event traditionally held on the Saturday preceding August Bank Holiday Monday.

Show publicity officer Colin Harman said: "Our show is more than the traditional village fete and produce show as we theme it and everything revolves around the theme. This year our theme is the Wild West."

Attractions include a rodeo bull ride, fun dog show, bouncy castle, races and tug of war and side stall attractions and entertainment.

The show ends with the grand auction of both produce and promises such a family day pass to Sudeley Castle.

The show serves two primary functions. The first is to bring residents, friends and supporters together for an annual get-together of fun and friendly competition.

The second is to raise much-needed funds to support local causes. In 2015 over £2,000 was distributed across the three Parishes and included costs associated with installation of defibrillators in Hawling and Brockhampton.

Residents of the three parishes and Friends of the Show may also enter into any or all of the nine sections of classes in the produce show.

The main sections are for vegetables, flowers, preserves, cakes, handicrafts and paintings, pictures & photographs. There is an additional section for 'on the day' entries and a Junior section for those aged 16 and under.