When: Monday, November 11, to Wednesday, December 11

Exploring the true stories of World War One through paint, animation, music and poetry, the exhibition is brought to life with performances by actors including Sean Bean, Charlotte Riley, Vicky McClure, Christopher Eccleston, Stephen Graham, and Sophie Okonedo.

The exhibition has been organised by Marketing Gloucester. It starts on Monday 11 November, Armistice Day, until Wednesday 11 December at the UK:DRIC exhibition space on the first floor of the Eastgate Shopping Centre. 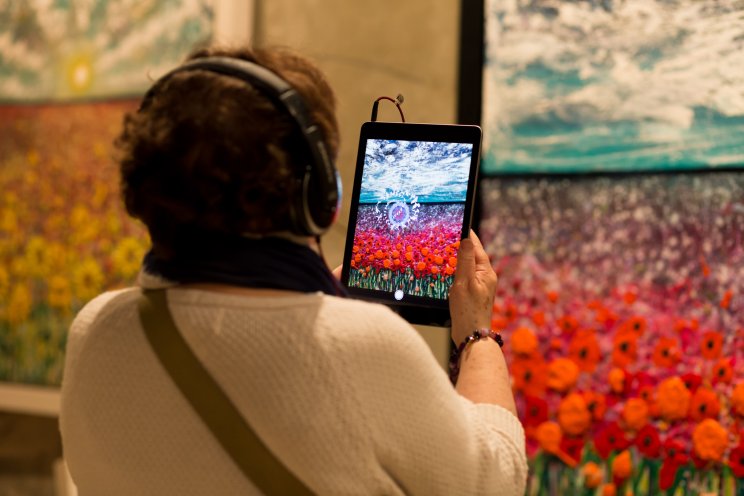 The collection consists of 10 paintings, all of which integrate digital imagery, music and augmented reality into the work.

Many of the paintings in the collection were inspired by poems from the First World War's most highly regarded poets, including John McCrae, Siegfried Sassoon, Wilfred Owen and Rupert Brooke, as well as contemporary poet John Agard and Poet Laureate Carol Ann Duffy.

Other paintings were inspired by "everyman" stories and memoires, such as the last letter written by a young British soldier on the eve of the Battle of the Somme.

The exhibition was credited at its launch as being the world's first augmented reality fine art exhibition, with its inspiration in part coming from the first-hand experiences of Marc's grandfather by marriage, Private Eddie Bigwood.

Eddie joined the Bristol Pals' Brigade as a 17-year-old in 1914 and, despite suffering a terrible facial injury during the Somme offensive, was patched up and sent back to the Western Front. He survived the duration of the war and died aged 100 in 1998.

One of the last 10 British survivors of the Great War, he finally began recounting his experiences in his last 20 years. This had a lasting emotional impact on Marc and many years later, having seen Scarlett's poignant poppy paintings and learned that she mixed the paint she used with soil taken from the Flanders battlefields by her father Raphael Ravenscroft, he proposed a new experiment utilising augmented reality, and thus the seeds for The Danger Tree were sown.

Through the use of the app Artivive, visitors can use their own personal devices to interact with the soldiers' experiences. Whilst the paintings appear conventional at first glance, the augmented reality technology allows the viewer to unlock hidden depths by digitally stripping away the countless layers of paint to unlock the creative journey of each painting and see the Great War reimagined.

Marc and Scarlett use traditional stop motion animation to capture every daub of paint as it is added to the canvas. This is then integrated with the narration, archive film, photography and music, resulting in an emotional impact that has brought audiences to tears.

Councillor Steve Morgan, cabinet member for culture, leisure & tourism at Gloucester City Council, said: "I am delighted that this unique and thought-provoking exhibition is coming to Gloucester. Like every community in the land Gloucester willingly gave so many of its sons to this most terrible conflict.

"The relevance of the issues raised by this exhibition still echo with those who have served our country in subsequent wars and with their families. Lest we forget."

Stephen Grimes, project manager at Marketing Gloucester, said: "The content of the exhibition itself is a new and unique look at war poetry and art that tells the stories of those who gave their lives for their country.

"The technology behind the exhibition is exciting in how it opens up a whole realm of possibilities for combining art and technology seamlessly and in an immersive and interactive way. The technology doesn't distract, but enhances the art experience by bringing the extraordinary stories to life."