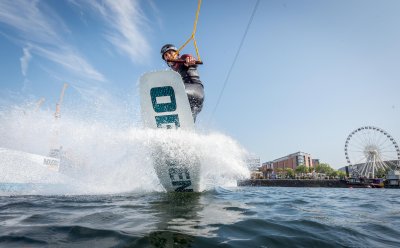 An exciting new attraction is guaranteed to make a huge splash at the 2017 Gloucester Tall Ships Festival.

For the very first time, the Spring Bank Holiday event (27-29 May) will feature amazing feats of skill from the Industry Pro Wakeboard Tour - all taking place against the spectacular back-drop of Gloucester Docks.

The Gloucester Tall Ships stop of the 2017 tour will see more than 30 of the very best of UK and European wakeboarding talent taking to the water for non-stop action.

Wakeboarding 'battles' will take place over the Sunday and Monday of the festival with initial group stages and then head-to-head ride-offs to decide the winner.

The action will take the form of many weird and wonderful tricks, including the memorably-named Tantrums, Whirlybirds and Moby Dicks, which will be expertly explained to the crowd as they happen by Industry Tour MCs.

Matt Crowhurst, the Industry Pro Wakeboard Tour marketing and media manager, explained: "This year, the tour has grown something crazy with an extra stop and with over £15,000 of cash up for grabs over the course of the four-stop series.

"So the riders are sure to be putting everything on the line to grab the cash, the honours and cheers of the crowds!

"We are just a little bit excited to have the wakeboarding fraternity joining this amazing weekend of water-based entertainment at the Gloucester Tall Ships Festival and reckon that the riders are going to be new crowd favourites.

"Industry Wake Parks will be on site with their own stand not only selling a vast array of soft goods and wakeboarding hardware but also ready to explain all about the world of wakeboarding, their wake park installations across the country, how to get into the sport and whatever other questions you can throw at them."

"Having such exciting on-water activities as wakeboarding, jet skiing and stand-up paddle boarding really shows off Gloucester Docks as a leisure destination."

"As a city, we should be trying to emulate places like Liverpool where there is an abundance of on-water activity.

"As one of the tourism gems of the city, the Docks should not only offer leisure and somewhere to live but also adventure and excitement."

The Wakeboard Tour is part of a superb programme of attractions for all the family at this year's Tall Ships Festival - the 10th anniversary of the award-winning event.

As well as a record seven ships, the festival will include sword fighting displays from Captain Jack, live music, a vintage fairground and food and drink stalls.

Access-all-areas wristbands for the Tall Ships Festival, organised by Marketing Gloucester, are now on sale.

Priced only £7 and valid for all three days, the wristbands provide entry to all the tall ships, the Soldiers of Gloucestershire Museum and the National Waterways Museum.

Admission to the festival is free to under-12s accompanied by a paying adult.

The festival, which takes place every two years, attracted record crowds of 120,000 in 2015 and scooped numerous accolades.

Running alongside, the third Gloucester Shanty Festival will showcase a great line-up of around 30 acclaimed acts performing at various venues around the city centre.

And as Gloucester Docks is the best preserved Victorian inland port in the UK, wonderful characters from that famous era will be parading around in their old-fashioned but distinctive garb during the festival.

Day passes costing £3, which will provide only access to the site, are available at the gate and from the Gloucester Tourist Information Centre.