A TV film extra who led an armed gang attack on a man in his own home has been jailed for nine years. 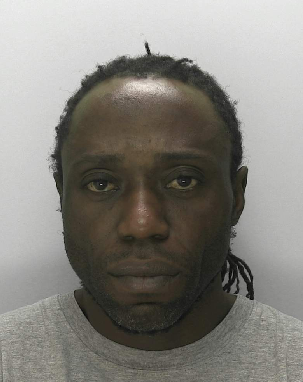 Masked Harley Yearwood and two accomplices inflicted a 'savage beating' on Daniel Banks after bursting into the bedroom of his home in King's Road, Stroud, Gloucester Crown Court was told.

Mr Banks, 23, was beaten repeatedly on the back with a cosh by one of the gang and punched, according to prosecutor Janine Wood, while Yearwood told him "I'll kill you - I'll shoot you" as he hit him on the top of the head and the nose with a silver BB gun.

Jailing him for nine years, Judge Ian Lawrie QC told him it had been a well-planned attack with 'remorseless' use of violence.

Mrs Wood said the attack went on for 15-20 minutes until Mr Banks was able to escape through a window when the gang were distracted.

She said "This was a planned attack by a gang tooled up with weapons who were in disguise. They subjected Mr Banks to a sustained and repeated beating.

"When his neighbour saw him immediately afterwards he was covered in blood, he was shaking in distress and wearing only his underpants."

Mrs Wood said the gang were all wearing masks and gloves and carrying a machete, a gun and a cosh. Yearwood was the biggest of the three and was clearly in charge and telling the others what to do.

"At one point his mask slipped and Mr Banks recognised him as someone he had seen around Stroud," she said.

"It was Yearwood who had walked into his bedroom first, pointing the gun at him, and he thought it was someone playing a joke on him but quickly realised that was not the case when the others walked in too.

Mrs Wood said the gang ransacked the room, at the same time punching Mr Banks or hitting him with weapons.

"They clearly didn't accept that all the money and cannabis he had was in the drawer," she said. "He was dragged along the hallway and up the stairs. He was taken into his mother's bedroom and the lodger's bedroom, which was turned upside down."

When they started trying to get a loft hatch open, Mr Banks was able to flee.

When police arrived they saw that Mr Banks was covered in multiple injuries and in a highly distressed state, she said.

"The doctor later saw 17 different areas of injury," she said. "There were cuts and bruises from top to toe.

"Apart from the really savage beating he had received, items had been taken from the house and from him, including a neck chain he had been wearing which was a gift from his grandfather.

In a victim statement Mr Banks said he had developed fear and anxiety as a result of the beating and had to give up work because he could not leave the house without a 'feeling of dread.'

He had also been worried about his dogs, which 'have not been the same since' the incident, added the prosecutor.

When Yearwood was arrested he denied being involved but evidence found at his home included the BB gun and machete with Mr Banks' blood on them.

James Doyle, defending, said Guyana-born Yearwood had been brought up in Barbados and qualified as an electrician before meeting his wife and moving to the UK n 1997.

They had since had three children and he was a loving father and husband, he said.

Yearwood had got work in the aviation industry and as "an extra working in BBC shows - well-known shows," he said.

Mr Doyle said Yearwood committed the offence because Mr Banks had been bullying his son over an alleged drug debt.

"This was motivated in some way to protect his son and inflict some kind of retaliatory hurt on Mr Banks," he said.

Judge Lawrie told Yearwood: "What makes your offences so serious are that it was a group action, using weapons and with a remorseless use of violence. There was a significant degree of planning and organisation by you."

The judge told Yearwood he would have to serve two-thirds of his nine-year prison term before he is eligible for parole licence.

The court also imposed a five-year restraining order, banning Yearwood from contacting Mr Banks in any way or from going to King's Road, Stroud.