Troops mark 10th anniversary with a nod to the past 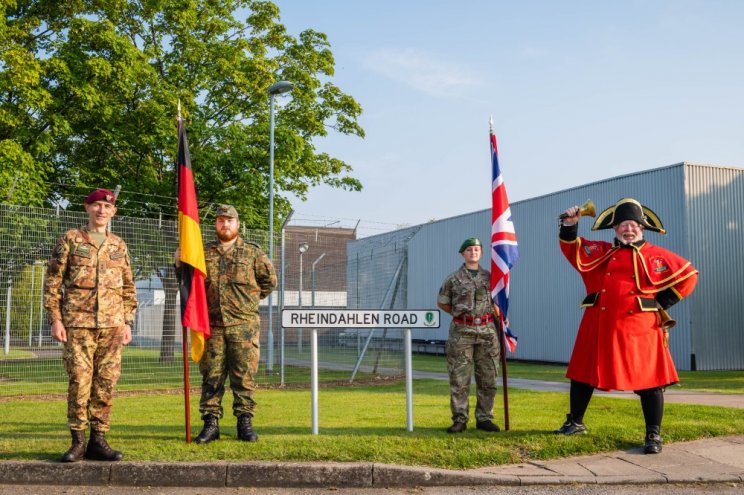 NATO troops have marked the 10th anniversary of arriving in Gloucester with a special ceremony.

Members of the Allied Rapid Reaction Corps were joined by town crier Alan Myatt to mark a decade at Imjin Barracks, Innsworth, to rename a street at the base Rheindahlen Road after the former base in Germany.

Mr Myatt, who was joined at the scaled-down ceremony by ARRC's Italian deputy commander, Major General Lorenzo D'Addario, said: "Today marks 10 years since the ARRC returned here from Germany to our beloved Shire.

"With warm feelings of great pride, it is a great privilege and honour to host this key NATO institution."

The UK-led ARRC is capable of commanding up to 120,000 multinational troops in a crisis. and since 1992 has led NATO operations in Bosnia, Kosovo and Afghanistan.

Imjin Barracks is the largest NATO base in the UK with 21 nations serving as part of the Corps as well as hundreds of their family members who have also made the English cathedral city their home.

The road-naming ceremony event is the latest in a series of events to mark the 10th anniversary of ARRC's arrival.

On July 4, Gloucester Cathedral's bells chimed The Star-Spangled Banner in honour of American soldiers based in the city while on Bastille Day the Mayor of Gloucester presented French officers with a wheel of Double Gloucester cheese as thanks for their support during the COVID-19 pandemic.