Cheltenham has "lost one of its biggest pillars" with the death of Kevan Blackadder, aged 60. 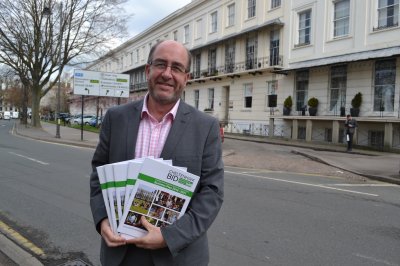 The director of Cheltenham BID, who edited the Gloucestershire Echo newspaper for six years and also worked as town centre manager, died on Monday after suffering from bowel cancer.

He is survived by his wife Liz.

Cheltenham BID board chairman Alex Rose said: "Cheltenham has lost one of its biggest pillars.

"Kevan worked tirelessly for the benefit of the town and was a friend to so many. He was the driving force of so many of Cheltenham and the BID's successes.

"Even during his illness he was still working and keeping up to speed. The BID team and I will miss him greatly."

Born in Manchester, Mr Blackadder grew up in Cumbria where he began lifelong passions for Carlisle United and rugby league, as well as his journalism career as a reporter at the Whitehaven News.

After spells at the Sunday Independent in Plymouth and the Bristol Evening Post, where he was assistant editor, he took over as editor of the Echo in 2008.

He said: "Kevan was a newsman through and through. He was passionate about what he did and led his team very well.

"Kevan was very alert to the digital revolution that has gone through all regional newspapers and he used that passion to drive the online agenda.

"That same enthusiasm was evident in his role after he left the Echo in leading the Cheltenham Business Improvement District."

After leaving the editor's chair in 2014, he took his passion for his adopted home town to the role of town centre manager and then the director's role at Cheltenham BID in 2015.

During his time in the role, Cheltenham BID took ownership of the town's Christmas light switch-on and markets and paving the way for more festive offerings.

He also helped establish Light Up Cheltenham, Cheltenham's Boutique Sale and the town's Chilli Fiesta and the Cheltenham Festivals... Around Town initiatives.

BID operations manager Belinda Hunt said: "Kevan was such fun to work with. He always saw the positive side of a situation and no matter how difficult the circumstances, he always managed to help put things in perspective.

"His passion for Cheltenham was infectious and you couldn't help but be swept along by his enthusiasm, with the businesses interests always at the heart of everything he did as BID director.

"I feel very fortunate to have worked with him as he helped the BID team to grow as people."

He took a step back from his role last summer due to illness but followed Cheltenham BID's work and continued to support where he could.

"He was a key voice and ambassador in representing businesses and championing the town and wider Gloucestershire, in his role as director at the Business Improvement District and prior to that as editor of the Gloucestershire Echo.

"Kevan will be sadly missed as a respected colleague and friend to many. Kevan's passing will be a huge loss to the town.

''Our thoughts are with Kevan's family at this time.''

Cheltenham MP Alex Chalk said the town had been "hit for six" by the news.

He said: "Kevan was a good man who put heart and soul into the town.

"I worked closely with him on the campaign for Cheltenham General Hospital, and I was always struck by his commitment to the local community. His contribution will be sorely missed."

"I stayed connected with him during his illness and last spoke to him just before Christmas, he was bravely fighting on in his normal humorous way.

"He was always great company to be with and never took himself too seriously."

He continued: "This really is very sad news and my thoughts go out to his family.

"Cheltenham is going to be a poorer place without him, but he has left a lasting positive legacy that I'm sure will be built on."

GFirstLEP chief executive David Owen described Mr Blackadder as "a lovely guy who did so much to support business in Gloucestershire and to drive Cheltenham forward".

And Sam Holliday, Gloucestershire development manager for the Federation of Small Businesses, said: "As both a passionate journalist/and then a great advocate for businesses in his adopted Cheltenham he had the same zeal and enthusiasm and was a truly decent, likeable guy. Gloucestershire is a sadder place today."