Chancellor Rishi Sunak has promised that self-employed workers will not be left behind as he announced a range of cornavirus support measures that he called the "most generous of any government in the world."

Announcing what he called the "next step in the economic fight against the coronavirus pandemic" Mr Sunak said self-employed workers would receive similar support to the measures announced for employed workers last week.

The Self Employed Income Support Scheme will see anyone who earns the majority of their earnings through self-employment receive a grant for 80 per cent of their average earnings. 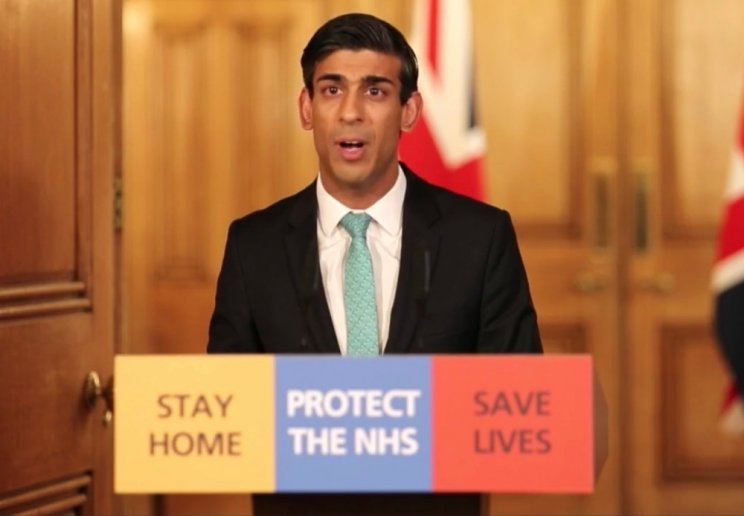 The Chancellor did concede that the scheme would be unlikely to be put into motion by HMRC until June, but payments would be backdated to March.

Speaking at the 10 Downing Street briefing, he said. "Many through no fault of their own, face the risk of losing their livelihoods. To you I say this, you have not been forgotten.

"We will not let you get left behind. We all stand together.

"To support those who work for themselves, I am announcing a new self employed income support scheme,

"The government will play self-employed people who have been adversely affected by the coronavirus a taxable grant worth 80 per cent of their average monthly profits over the last three years, up to £2,500 per month.

"This scheme will be open for people across the UK for three months and I will extend it if necessary.

"You will be able to claim these grants and continue to do business and we are covering the same amount of income for a self-employed person as we are for furloughed employees who also receive a grant for 80 per cent.

"That's unlike almost any other country and makes our scheme one of the most generous in the world.

"Providing such unprecedented support for self-employed people has been difficult to do in practice and the self-employed are a diverse population with some people earning significantly more in profits.

"So I have taken steps to make this scheme deliverable and fair.

"To make sure the scheme offers targeted support for those in most need it will be open to anyone that makes trading profits of up to £50,000.

"To make sure only the genuinely self-employed benefit, it will be available to those who make the majority of their income by self-employment.

"And to minimise fraud, only those already in self-employment who have a tax return for 2019 will be able to apply.

"95 per cent of people who are majority self-employed will benefit from this scheme.

"HMRC are working on this urgently and are expecting people to be able to access the scheme no later than the beginning of June.

"If you are eligible HMRC will contact you directly, ask you to fill out a simple online form and then pay the grant straight into your bank account.

"And to make sure nobody misses out on support, we have decided to allow anyone to miss the filing deadline in January, four weeks from today to submit their tax return."

Mr Sunak said that the scheme had been complex to work out and will be similarly difficult to implement, but reiterated that it needed to be both fair and deliverable.

He restated the previous welfare measures announced last week to try and comfort anyone who feels they will be unable to make ends meet before receiving their payment in June.

He also praised the Federation of Small Business and the trade unions he has conferred with before finalising the measures.

"The scheme I have announced today is fair, it is targeted at those who need it the most and, crucially, it is deliverable," he said. "It provides unprecedented level of support for self-employed people.

"I must be honest and point out that in devising this scheme in response from many calls for support. It is now much harder to justify the contributions of people from different employment statuses.

"If we all want to benefit from state support, we must all pay in equally in the future.

He concluded by listing the many measures taken out in the last 10 days, all of which have been delivered by a chancellor, himself just a month into the job.

"These last 10 days have shaken our country and our economy like never before," he said.

"In the last two weeks we have put aside ideology and orthodoxy to mobilise the full power and resources of the British state.

"We have done so in pursuit of a single goal, to protect people's health and economic security.

"By supporting public services like the NHS, backing businesses and protecting people's jobs and incomes.

"What we have done, I believe, stand as one of the most significant economic interventions at any point in the history of the British state and by any government, anywhere in the world.

"We have pledged that whatever the resources the NHS needs, it will get.

"Promised to pay 80 per cent of wages for furloughed workers for three months up to £2,500 per month.

"Deferred more than £30billion of tax payments until the end of the year.

"Agreed nearly 17,000 time to pay arrangements for businesses and individuals.

"Made available £330billion in loans and guarantees.

"Introduced cash grants of up to £25,000 for small business properties.

"Covered the costs of statutory sick pay for small and medium sized businesses for up to two weeks per employee.

"Agreed a three-month mortgage holiday with lenders and given a billion pounds more support for renters through the local housing allowance.

"And today we've announced one of the most generous self-employed support schemes anywhere in the world.

"Despite these extraordinary steps there will be challenging times ahead.

"But I am confident that the measures we have put in place will support the millions of families, businesses and self-employed people to get through this.

"We will get through it together and emerge the other side, both stronger and more united."