Shopping trips will help economy to bounce back

Britain is set to see a big return to spending by shoppers as lockdown restrictions ease, according to new research.

Research by Deloitte found "going to a shop" topped the list of leisure activities people are most likely to do after lockdown, as reported by the BBC.

Deloitte's survey found that six out of 10 people planned a return to the shops within a month of restrictions lifting. It said high levels of saving and the success of the vaccination rollout would lead to a surge in spending in the coming months. 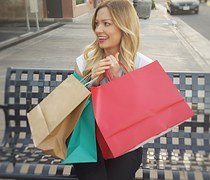 Separate research suggested that the economy is set to grow at its fastest rate on record this year, helped by a big return to consumer spending.

Forecasting body EY Item Club has upgraded its 2021 growth forecast from five per cent to 6.8 per cent, which would be the fastest rate since Office for National Statistics (ONS) records began.

The UK's GDP, which measures all activity in the economy, shrank by a record 9.9 per cent last year as Covid restrictions hit output. But EY predicts it will return to its pre-pandemic size in the second quarter of 2022 - three months earlier than previously forecast.