Two teenagers have been arrested after a lorry loaded with £120,000 worth of suspected stolen chewing gum was pursued the wrong way along a dual carriageway by police on Wednesday morning (May 4).

The pair, aged 18 and 19, were arrested after the lorry suddenly stopped during the chase on the A40 Golden Valley by-pass between Gloucester and Cheltenham and the occupants ran off.

Police dog Tekla and his handler tracked the fugitives and the two teens, both from Leeds, were arrested.

"The incident began shortly after 3am when police received a report of a man at Gloucester Services removing items from an HGV. The vehicle began to travel north on the M5 before being located by officers as it approached junction 11, where it failed to stop for police.

"Further specialist officers joined the pursuit and followed the suspect vehicle as it left the motorway at junction 11. The lorry then drove the wrong way around the roundabout and joined the A40 Golden Valley, driving on the wrong side of the carriageway.

"The vehicle was stopped in the road and the occupants attempted to run from police on foot before being found by police dog Tekla and their handler.

"The lorry is suspected to have false plates and contained a large quantity of chewing gum estimated to be worth over £120,000.

"Both arrested men remain in police custody at this time." 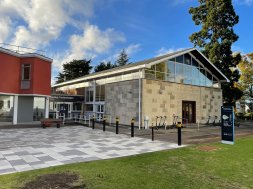 University receives £5.8m in big boost to cyber and digital

Quedgeley-based sports nutrition specialists Nutrition X are celebrating another successful year by rounding it off with a European-wide award win.

The CBI is today (Thursday) urging the Government to extend the Energy Bill Relief Scheme for significant energy users beyond the end of March 2023.