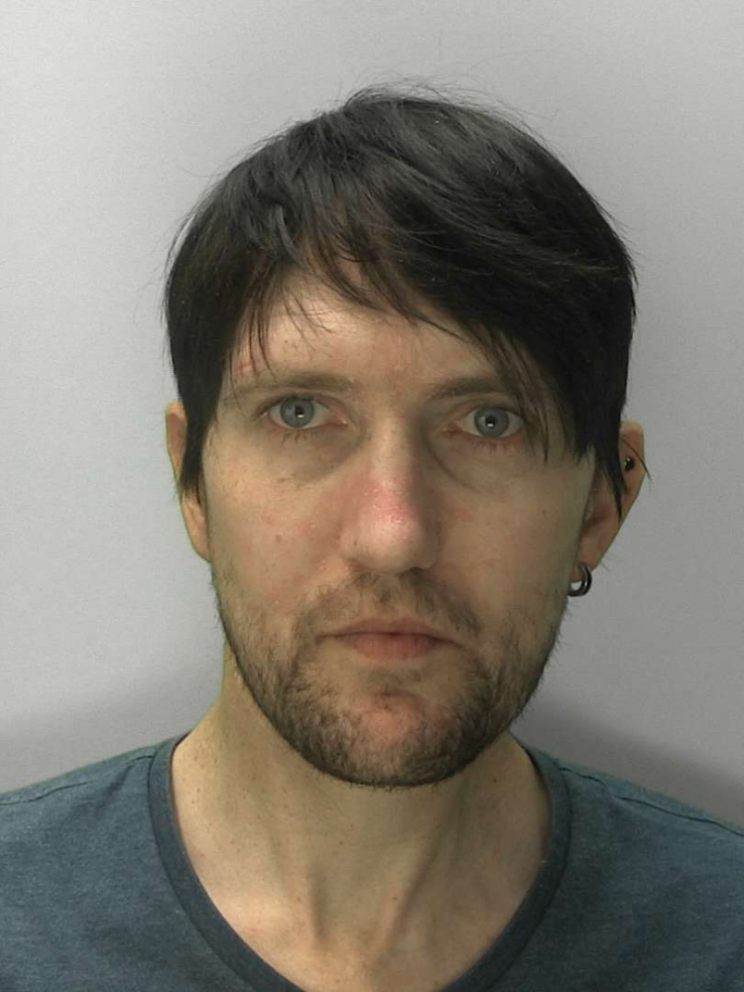 Brian Grater (pictured right), 40, also told police he had a bomb in his house in Columbia close, Kingsholm, Gloucester and the area was evacuated, Bristol crown court was told.

The dramatic four hour siege, with eight armed officers surrounding his home, began after his personal alarm to the local police station went off, the court heard. The alarm had been provided to him by the police after he was stabbed and badly injured in an earlier incident.

Officers rushed to his home in response to the alarm but he began making death threats to them and shooting from inside the house, said prosecutor Ken Bell.

Grater was jailed for 21 months after he admitted having an imitation assault rifle with intent to make people fear it was real and would be used on February 13th last year.

He also pleaded guilty to possessing a prohibited weapon, a taser stun gun, at his home address on December 19th 2019.

He asked for an offence of having a martial arts key chain, classed as an offensive weapon, to be taken into account.

Mr Bell said it was at 1.11pm on Feb 13 that Grater's personal alarm to the station went off.

"A police officer was sent to the scene very quickly but as the address had been subjected to firearm deployment on an earlier occasion, on September 13th 2018, the officer was told to wait for a second officer to assist." Mr Bell said.

"The pair then approached Grater, who responded that he was going to shoot them and 'blow their brains out'.

"Over the next four hours Grater made a number of threats to shoot at the officers. He told them he had a 9mm handgun and a bomb in the flat."

The court was told that at this point his neighbours had to be evacuated and the bomb squad were called - although they were stood down shortly afterwards.

Mr Bell added: "Grater, inside his house, then started firing at his front door with what the police believed to be air pellets.

"At one point a long-barrelled weapon was fired through his letterbox directly at the officers.

"Eventually at 5.45pm officers negotiated their way into the flat and detained Grater.

"They found an Aladdin's cave full of weapons that included a Chinese challenge daisy spring, air rifles, BB guns and rifles, a Luger pistol and a range of knives.

"He also had a number of crossbows, which are legal to posses, along with the relevant arrows and bolts.

"The flat was in a very untidy state and during a later visit on December 19, 2019 officers found a taser stun gun, which Grater stated had been there all the time."

In mitigation Alec Small defending said: "Grater's life up until 2018 had been law abiding.

"However his life was changed forever when he was stabbed and this has left him with permanent lung damage and a reliance on some hefty pain killers.

"Combined with his alcohol addiction this is a lethal cocktail of drugs. He was in a state."

Grater had always had a fascination for guns and had a large collection of guns of all varieties, the court was told

Mr Small added: "Apart from the stun gun, the guns found in Grater's flat are not illegal weapons. He was once an archer in a sporting capacity.

"Grater explains that the stun gun was a gift from his brother who lives in South Africa some four years ago. He states that he did not realise it was illegal in this county and he stored it by his front door for his own security. This does not excuse his actions, but it does explain them.

"Grater must count himself lucky that Gloucestershire Constabulary acted in the professional way they did. If he had done the wrong thing at the wrong time the police would have shot him and this hearing could be being held in a different court.

"Grater is a man who needs to be punished, but he also needs support from various bodies."

Judge Mark Horton told Grater: "You surrounded yourself in your flat, with your rather strange and concerning obsession, with a wide variety of guns. Although they were BB guns or similar weapons - they were copies of real guns and manufactured with a view to persuading others that they were real.

"There were knives, there were crossbows, there were bolts and arrows and other weapons - and it now appears that amongst them all was a stun gun.

"During the course of the four hour period you pointed a gun through the letter box at the officers and fired it. Your purpose in so doing, associated with the language you used and the threats you made, was that you were going to kill the police officers. These were not idle threats.

"Two of the officers indicated at the time they feared for their lives.

"You later threatened that you had a bomb in the premises and your neighbours had to be vacated, clearly causing them to be fearful. Thankfully the bomb threat was false.

"You then threatened to shoot the police officer's brains out with a 9mm gun and said that you were going to kill them.

"Even though this was an imitation gun, it looked extremely real. A person looking down the barrel of a gun has no idea whether it has real bullets or not. You used the gun to reinforce the threats to kill.

"The tazer weapon that you had was a real one. And, unusually, you have asked for another offence of possessing a martial arts weapon to be taken into consideration.

"The martial arts key chain is an unusual offensive weapon which can only be chosen because of what it was. It is unquestionably designed and meant to be used as an offensive weapon.

"By way of mitigation you are a man of good character. Your life has had a number of tragedies and unusual features to it. You yourself have appeared to have been a victim of a stabbing the result of which is that you have numerous medical problems.

"This was a long and protracted event. And you repeatedly made these threats. This is obsessive behaviour by you in obtaining these weapons and your actions are evidence of that behaviour.

"What was your intention in possessing this gun in this way? Guns frighten and terrify people. They intimidate and that was precisely what you used them for.

"Your threats were directed at police officers in the execution of their duty. These were very serious threats which were believed by experienced officers. You poked the barrel of the gun through the letter box and fired it.

"Your threats then reached a different level when you revealed that you had a bomb. All your neighbours were terrified at the events which were unfolding.

"These offences merit a substantial term in prison and the only sentence this court can pass must be a term of imprisonment."

Grater's head slumped forward as the judge sentenced him to 21 months in prison. Judge Horton also ordered for the forfeiture and destruction of the Tazer stun gun, the barrelled gun and the martial arts key chain.

**The Judge praised Gloucestershire Constabulary for the 'professional way they acted by using considerable restraint and discretion.'

"It is unquestionable that despite the threats made to the officers and the state Brian Grater was in that they concluded that he wasn't genuinely a risk to life," said the judge. "However, this meant that officers took a serious risk themselves in making this assessment.

"They could see that Grater was experiencing some personal difficulties."

For the four hours during which the police officers were involved they had to balance the unfolding situation with extreme skill and care because of the risk and threat that Grater presented, not only to them, but to the wider public, Judge Horton added.

"If the police had not known Grater's background, his history and difficulties, undoubtedly the actions chosen could have resulted in a different outcome.

"It took a large number of police personnel to contain the situation, putting their risk analysis training into practice.

"It took four hours to bring this matter to a close. This required two specialist negotiators dealing with Grater and eventually persuading him from whatever was his true intent."