Gloucestershire trading standards officers found £1,700 of illegal tobacco stashed behind a mirror in a Cheltenham shop. 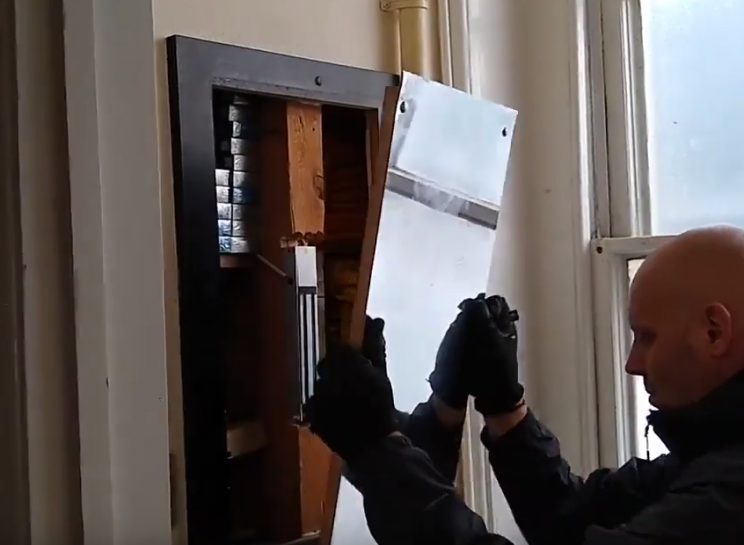 They had visited the store to follow up a previous test purchase where an undercover trading standards officer was able to purchase a pack of counterfeit cigarettes for £3.50.

Officers entered the shop just as a customer was waiting by the till and a member of staff was walking down stairs at the back of the shop with two packets of counterfeit cigarettes. He tried to run off, dropping the cigarettes as he did.

While talking to the officers he also tried to discard a piece of metal which would later turn out to be the "key" to the seizure of nearly £1,700 worth of illegal tobacco.

Officers scoured the premises before discovering the purpose of the piece of metal. A mirror was found in the first-floor toilet room which looked new and out of place.

They then found that the piece of metal was used to lever the mirror away from the wall, which was held in place by an electromagnet.

Behind the mirror, officers found the £1,700 haul of 215 packs of cigarettes and 91 pouches of hand rolling tobacco. Counterfeit versions of Richmond, Mayfair and Amber Leaf were found alongside, Richman, Marlboro Gold and Cutters Choice.

"The shop's shelves were sparsely stocked with a limited range of low value, long life goods masking the fact the shop is a front for the sale of illegal tobacco," said a spokesperson for the trading standards department.

Cllr David Norman cabinet member responsible for trading standards said, "Once again this is a great result for our trading standards team. We've said it before, but we will not tolerate the sale of illegal tobacco in Gloucestershire.

"As well as posing a significant public health risk, the sale of counterfeit tobacco undercuts legitimate law-abiding traders who are trying to compete."

Anyone with information on the sale of illegal tobacco, however small or insignificant they might think it is, is encouraged to report it by calling 03454 040506 or anonymously via the website at glos.tradingstandards.uk/report.htm