Police have confirmed that a woman from Gloucester has died after the two-vehicle collision near junction 12 of the M5 Motorway on Thursday morning.

The incident occurred on the northbound carriageway at around 8.10am this morning. 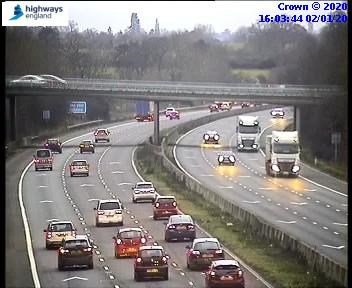 Police and the air ambulance attended the scene but the woman from Gloucester who has yet to be named was declared dead a short time later.

Her next of kin has been informed. The driver of the other vehicle suffered non-serious injuries.

The motorway was closed in all directions in the immediate aftermath of the incident while a collision investigation was carried out.

The southbound M5 has since reopened, but work is continuing on the northbound carriageway between junction 12 and 11A.

Shortly before 4pm, Gloucestershire Police confirmed that one lane of the northbound M5 had reopened, with the two other lanes and the junction 12 slip road remaining closed.

Highways England report that there is at least a 30 minute delay on approach to the scene and there is slow-moving traffic for five miles.

Gloucestershire Police are asking for any witnesses who have yet to contact them to call 101 and quote incident 67 of January 2.