The Department for Levelling Up, Housing and Communities (DLUHC) has announced the award of £1.5 million to the county council to support its proposed M5 Junction 9 and A46 (Ashchurch) Transport Scheme. 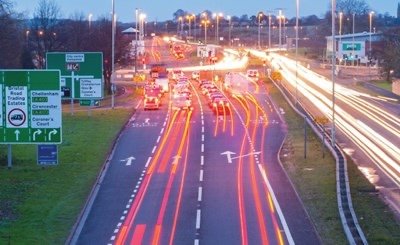 A significant investment is needed for the development of the M5 Junction 9 and A46 (Ashchurch) Transport Scheme Outline Business Case (OBC) of around £14million in total of which £8 million was approved last year by the county council's cabinet.

The £1.5 million announced by government will form part of the remaining £6 million needed for this work.

The M5 Junction 9 and A46 (Ashchurch) Transport Scheme is a proposal to upgrade the M5 Junction 9 near Tewkesbury and re-route the section of the A46 which currently passes through Ashchurch to the east of the M5.

The new road would remove significant volumes of traffic from the A46 through Ashchurch, improving journey times and reliability helping to reduce mainline queueing on the M5 and the approaches to M5 junction 9 at peak periods due to congestion, which is currently a safety concern.

This will result in an improved quality of life for residents along the A46 through Ashchurch, with better air quality and improved safety and connectivity which will encourage more sustainable transport use and help to support local economic growth.

It is also hoped that the works will reduce traffic congestion expected as a result of the planned Cotswold Designer Outlet development currently being built off the A46.

Removal of through traffic from the A46 will provide opportunities to deliver a superior environment for cycling and walking, on much quieter, better designed local roads; specifically between Ashchurch for Tewkesbury train station and the town.

At a regional level, the A46 is a nationally significant route between the south west and the Midlands, offering an important alternative to the A42/M42 for traffic travelling between the M1 and the M5.

The proposed scheme is in the early stages of development and the exact location of the new road and details of the junction upgrade are yet to be decided.

Technical work is currently underway with the aim of presenting a number of suitable route options for public consultation in autumn 2022.

The county council now needs to complete the OBC and at its meeting next month cabinet will be asked to approve the spending for this purpose.

Cllr David Gray, cabinet member for environment and planning said: "These are nationally significant transport proposals. They have the potential to bring a myriad of both economic and environmental benefits and help us to attract hundreds of millions of pounds of investment into Gloucestershire.

"The scheme will not only boost the local economy and help to address local and national housing needs, it will do so in a sustainable way that will improve road safety, encourage active travel and enhance the quality of life for those living and working near the A46 in Ashchurch."