Forest Green Rovers have taken another step on the road to the club's new stadium after it was approved by the Football League. 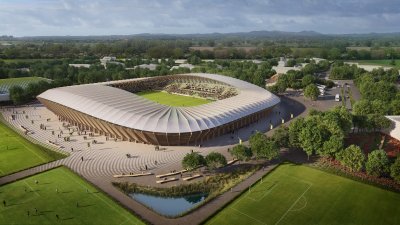 The League Two club's ambitious plans for the world's first wooden stadium as part of an Eco Park have been delayed but chairman Dale Vince welcomed the latest decision.

The founder of Stroud power company Ecotricity wrote on social media: "Fab news and another small but big step for Eco Park.

"The EFL have approved the move to the new home for Forest Green Rovers, next to Junction 13 of the M5."

He criticised Stroud MP Siobhan Baillie for not backing the scheme having supported a failed call by Eastington Parish Council to have the application called in.

Plans for the 5,000-seat stadium were rejected by Stroud District Council in June 2019 before a second application later that year was passed narrowly.

Head of communications Chris Pockett said: "Forest Green Rovers is a true community club, yet has a global profile due to its unique approach to sustainability, so extending our long-term relationship makes great sense for both organisations."