Businesses in a Cotswold market town are watching closely as proposals to close its tourist information centre come up for discussion this week. 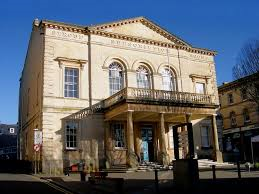 Stroud District Council is due to meet on Thursday (December 6) to discuss the proposal to close the centre in the town's Subscription Rooms.

According to the local authority such a move would save it £81,000 a year, less a series of £2,000 grants totalling £14,000 it would make available to help promote attractions across its district.

Three TIC staff roles are set to be made redundant and staff have been consulted.

Ron Cree, who runs R and R Books in Nelson Street, Stroud, said: "The tourist information centre has been a very important part of the town. It was a hub for everything and the first port of call for many when they visited - letting them know what was on and where the bed and breakfast accommodation was. It would be quite a loss."

The district council and town council struck a deal earlier this year to keep the town's Subscription Rooms, home to the TIC in public ownership.

That deal will see the building, a major venue in the town, transferred instead to the hands of a trust. But seems it is this deal, regulations around trust and the financial pressures faced by the district, that have brought about the proposal for the TIC.

Stroud Town Council said this morning (December 3) that it "regrets" the recommendation by the district to close centre.

"The town council had hoped to work with the district council to potentially relocate the service elsewhere, but has now independently commissioned development work on a proposal to potentially create a Tourism Hub based at Stroud Railway Station," said a town council spokeswoman.

It added: "The charity commission has advised the (Stroud Subscription Rooms) trust that, under charity regulations, it would not be permitted to run the TIC."

A cross-party tourism task force of the district council has recommended to its community services and licensing committee that the district's seven market towns could each get a £2,000 tourism grant which they could use in partnership with neighbouring parishes.

When it meets on Thursday the committee is also set to approve joining a county-wide Gloucestershire First Local Enterprise Partnership (GFirst LEP) group to promote Gloucestershire.

"The opportunity is there for towns and parishes to work in partnership and the report notes that three tourist information centres are operating in the market towns already and two more are being set up," said committee chairwoman, Councillor Mattie Ross.

Berkeley, Dursley, Nailsworth, Painswick, Stonehouse, Stroud and Wotton-under-Edge would be encouraged to apply and work with neighbouring town and parish councils.

It claims customers can do their own research and bookings online so there is less need to visit or contact a TIC.

On Thursday committee members will also be asked to consider appointing a member from the cross-party task and finish group to GFirst LEP's visitor economy/tourism business group.