Hundreds exceed speed limit on A417

An incredible 377 drivers were caught exceeding the 40mph speed limit on the A417 at Nettleton Bottom in April.

Throughout the lockdown and the subsequent return towards normal traffic flows, the county's Camera Enforcement Team (CET) has been at sites across the county to remind drivers about their behaviour and take action against people who drive at excessive speeds or commit other offences. 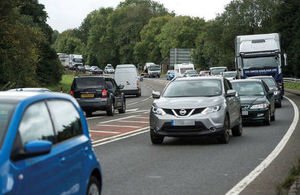 Nearly two-thirds (64 per cent) of those caught speeding by the team were clocked at Nettleton Bottom.

Also at Nettleton Bottom, seven drivers were reported to not be wearing their seatbelts and six were reported for incorrect spacing on their numberplates.

Around the county, a further 212 drivers were caught speeding, including 53 at Longford Lane in Gloucester, 21 on Minchinhampton Common and 28 on the A44 Five Mile Drive.

A further 18 drivers across the county were reported to not be wearing their seatbelts, while another 12 had incorrect spacing on their numberplates.