A 35-year-old homeless man has been jailed for 42 days after smashing his way into a fish and chip shop in Stroud and taking a Smart car which he then used for a joyride around the town. 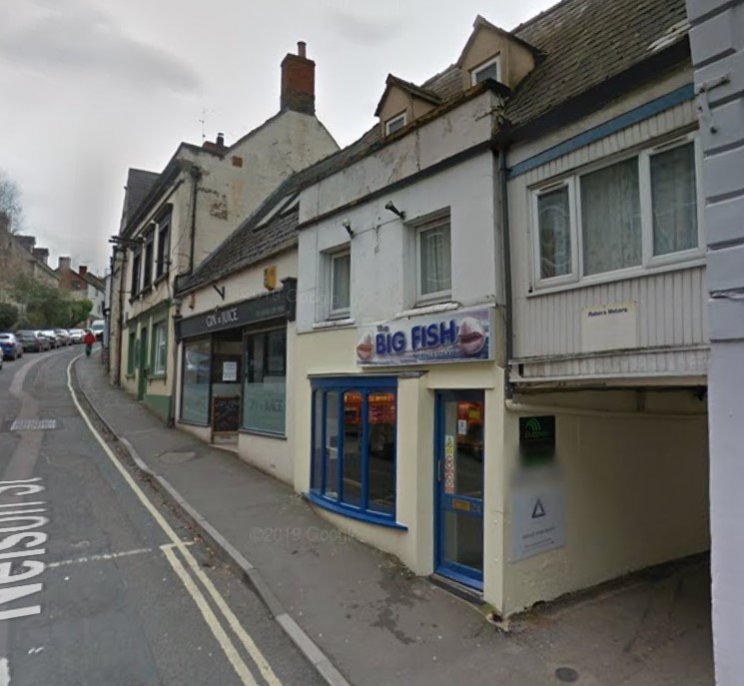 At Cheltenham Magistrates Court on Wednesday (November 16) prosecutor Cathy Thornton said that at 7.30am on November 2, the police received a call from Josefina Fernandez, the owner of the Big Fish and Chip Shop in Nelson Street in Stroud, stating that the front door had been damaged and that a large rock could be seen inside the premises.

She also noticed that the Air Ambulance charity donation tin containing about £80 had been stolen.

Ms Thornton added: "CCTV reveals that at 3.19am on November 2 this year, Simon King was seen trying to shoulder-barge the door but failed.

"He disappeared for a few minutes and came back with a large rock and threw it at the door window and this time he smashed it. The culprit climbed through the broken glass into the shop and took the grey charity tin from the counter.

"The man was wearing a track suit jogging bottoms and was identified after he left a blood stain on an inner wall."

The court was told that the police went to Wesley Court, where King had been known to have recently been sleeping rough under the community stairwell, and found his belongings, which included the blood-stained jogging bottoms. Both blood samples were later matched to King.

Ms Thornton then went on to explain that a woman had mistakenly forgotten that she had left the keys to her Smart car in the ignition when she unloaded the vehicle in Thrupp Lane during a heavy rain storm on November 14.

"Sometime during that evening into the hours of the following day King took the Smart car without permission.

"At around 12.30am police began to receive reports from residents living along a single-track road in the area, who had been awoken by the noise, of a motorist in a Smart car driving up and down the road in a suspicious manner.

"The residents noticed that the driver was discarding items from the vehicle. The police arrived and spoke to some of the residents who explained to the officers what they had seen.

"A search was made of the area and the Smart car was found with King located nearby. He was arrested on suspicion of taking the vehicle without consent."

The court was told that King made no comment in his police interview and he has now been recalled to prison as this conviction has put him in breach of his parole conditions.

Jane Taylor, defending , said that it was a sad tale for King as he had effectively been homeless for the past seven years. She added: "King is desperate to try and turn his life around. He needs proper medication for his drug habit.

"King is realistic about his prospects today in that he will receive a custodial sentence on top of his prison recall, which ends on January 4, 2023.

"These latest offences were not planned. He states that he has a prescription from Change Grow Life for his medication to help him get off drugs and this is to be dispensed at Boots in Stroud.

"However, due to a criminal behaviour order he is prohibited from entering this shop, and so he has not been taking his medication.

"His intention was to sleep in the vehicle, which he found unlocked, but he was tempted into driving it around."

King pleaded guilty to stealing a charity donation tin containing £80 from the Big Fish and Chip shop in Stroud on November 2, 2022, and to taking a Smart car without consent overnight November 14/15, 2022, from Nelson Road in Stroud.

District Judge Nicholas Wattam told King: "You admitted both sentences straight away, but because of your previous convictions a custodial sentence is inevitable. I understand that you have been homeless since you were last released from prison.

"However, the burglary was a mean offence, and you stole money from a charity tin."

The judge jailed King for 42 days which begins after his current prison sentence ends and ordered that he pay £154 mandatory surcharge.