GUILTY: Gloucester teenager who imported a gun was plotting a massacre

A 19-year-old man who ordered a deadly handgun and ammunition from an American dealer intended to use them to carry out a massacre, a jury at Gloucester crown court decided today.

Kyle Davies, of Wotton, Gloucester, wanted the Glock 17 pistol and 9mm rounds of hollow-nose ammunition to copy such infamous killers as the 1999 Columbine school gunmen in America and Norwegian Anders Breivik, who shot 69 teenagers dead on a beach in 2011, it was alleged during his two weeks trial.

Today a jury of seven women and five men rejected Davies' claim that he intended to kill only himself with the gun. They decided that he did have an intent to endanger life with the gun. 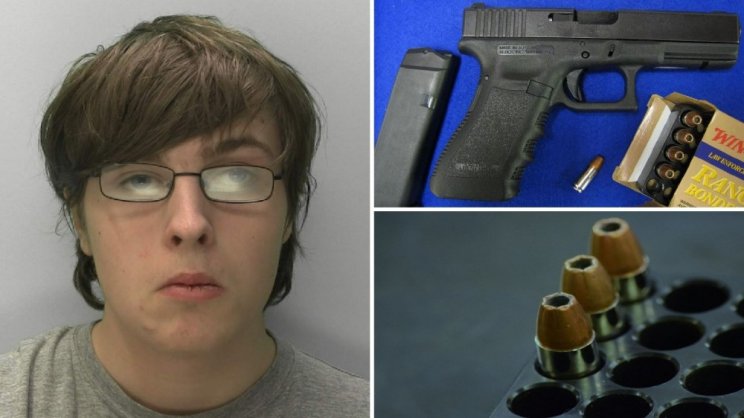 Davies' mother Sarah, sitting at the back of the court, buried her head in her hands as the jury foreman announced the guilty verdicts.

Judge Paul Cook told Davies "Clearly you are looking at a significant period of custody but I need to know more about you before I proceed to sentence.

"I need to know the risk you pose to society. Therefore I am ordering psychiatrict and probation reports to be prepared on you."

Sentence was adjourned to a date to be fixed in about two months time.

Duiring Davies' trial the jury heard details of the 'manifesto of death' that Davies had compiled with detailed lists of weapons, explosives and body armour that would be needed for a successful mass killing.

His laptop, mobile phone and a memory stick were found to contain a mass of detail, including timelines, which the prosecution said proved he was planning a mass killing.

The prosecutioin said he had made 'poster boys' of the Columbine killers Eric Harris and Dylan Klebold and also of Norwegian mass killer Anders Breivik.

Davies, however, maintained all his research into the infamous murders was carried out merely because he was interested in the mindset of a mass killer.

Interviewed after his arrest by armed police at his Gloucester home in June last year Davies maintained he wanted the gun just to commit suicide. He repeated that in evidence to the jury last week.

The court heard that he ordered the £300 pistol and ammunition via the Dark Web from a dealer in New Jersey, USA.

When it arrived in the UK it was intercepted by police and a dummy package was made up to look like the original, It was then delivered to Davies at his home by an undercover policeman posing as a deliveryman.

In the witness box Davies said he had tried to kill himself when he was 15. He told the jury he could see no point in being alive and he was depressed and thought about suicide every day.

He denied being obsessed with the Columbine killers and Anders Breivik and said he was just interested in them because they were relevant to his A level psychology studies.