Gloucester Rugby fans will be able to watch their team in person on Monday for the first time since the resumption of the season - but only 1,000 of them. 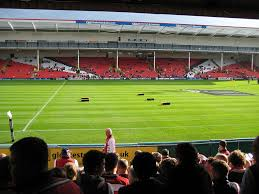 Gloucester's Gallagher Premiership match is the only rugby fixture on the Government's latest list of pilot sporting events for limited numbers of spectators.

Around 3,000 fans were allowed to watch the match between Harlequins and Bath at the Twickenham Stoop on Saturday, but stronger restrictions announced yesterday have limited the number allowed into Kingsholm to 1,000.

Gloucester chief executive Lance Bradley said: "We're absolutely delighted to have been selected to host a pilot event to let fans back into Kingsholm Stadium on Monday.

"We believe that Gloucester Rugby fans are the most passionate in the country and I know they're desperate to watch our club play live again.

"It should be a great advert not only for Gloucester Rugby, but for Premiership Rugby as a whole."

Priority for tickets will be given to 1873 Club members and club members who donated their season ticket money to Gloucester's new training facility after the season was suspended in March.

Any remaining tickets will go to other members with no general sales tickets likely to be available with the match televised on BT Sport (7.45pm).

The Government said it was continuing to review whether more fans will be allowed to return to events from October 1.

Culture Secretary Oliver Dowden said: "In light of increasing transmission rates, the Government is reviewing the proposed sports and business events pilots ahead of the 1 October and we will unfortunately need to scale some back.

"We know fans and audiences are eager to return, and jobs depend on this too, so work continues around the clock on the moonshot project with the ambition of having audiences back much closer to normal by Christmas, if safe to do so.

Saturday's League Two football match between Cambridge United and Carlisle United was due to be one of the pilot events, but the change from the scheduled 2,000 fans has come to late.

The Women's Super League clash between West Ham and Arsenal will be the only match on Saturday featured on the list.

Also featured are three horse racing meetings, basketball and speedway fixtures and three matches in cricket's Vitality T20 blast next week, as well as the women's T20 clash between Western Storm and Sunrisers at Bristol on September 19.