Gloucester Rugby may not have been able to welcome fans into Kingsholm for many months, but the club has called on fans and businesses to come together to support each other. 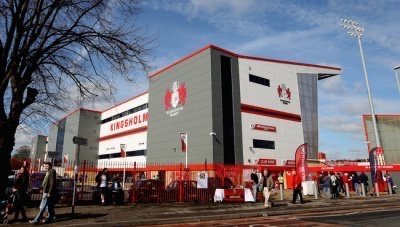 The club has launched a Squad of Thousands to engage with the community, giving the chance to access exclusive content and behind-the-scenes access to the team.

Coronavirus has meant the loss of millions of pounds for the club with fans unable to attend - a blow felt beyond the gates of Kingsholm with businesses from pubs to restaurants and taxi firms, as well as club partners.

And the impact has been felt down to the grassroots game with research showing restrictions on sport has impacted the mental health of both players and fans.

While the package of financial support and news of a limited return of fans to the stands announced by the government last week is welcome news, Gloucester Rugby say there is much work to be done.

Chief executive Lance Bradley said: "Gloucester Rugby Club has been an integral part of the Gloucestershire community since 1873.

Today we employ almost 300 people from the local community and have worked with more than 200 schools, local clubs and community groups through our Foundation.

"We're passionate about the game and our community roots, so having no fans at games for the last nine months has not only been financially challenging for the Club and the wider Gloucester business community, but also difficult for our fans, who live and breathe the Cherry and Whites."

He continued: "We're incredibly excited that we'll have some fans back from December, but also mindful that many won't be able to see games live. With that in mind we're launching our Squad of Thousands - a chance for our fans and local businesses to come together and maintain their connection to the team and our community."

Former Gloucester star and World Cup winner Mike Tindall has added his support to the campaign.

He said: "We want to galvanise supporters to get behind the Cherry and Whites and do their part to protect the legacy.

"Gloucester Rugby is more than just a rugby team, it's the cornerstone of the local and wider rugby community."

With Gloucester placed in tier two restrictions from December 2, Gloucester will be able to welcome back 2,000 fans for matches, starting with the visit of Harlequins on December 6.

Freemans, the largest events company in the UK, manages the match day food and beverage at Kingsholm.

Managing director Stephen Freeman said: "Covid-19 has had a hugely detrimental effect on the game of rugby and the businesses that surround it.

"As a partner to Gloucester Rugby Club for more than 25 years, we know how important they are, not just to our own business, but to the wider Gloucestershire community.

"We've joined the Squad of Thousands and would encourage everyone with a love of the game to sign up too."