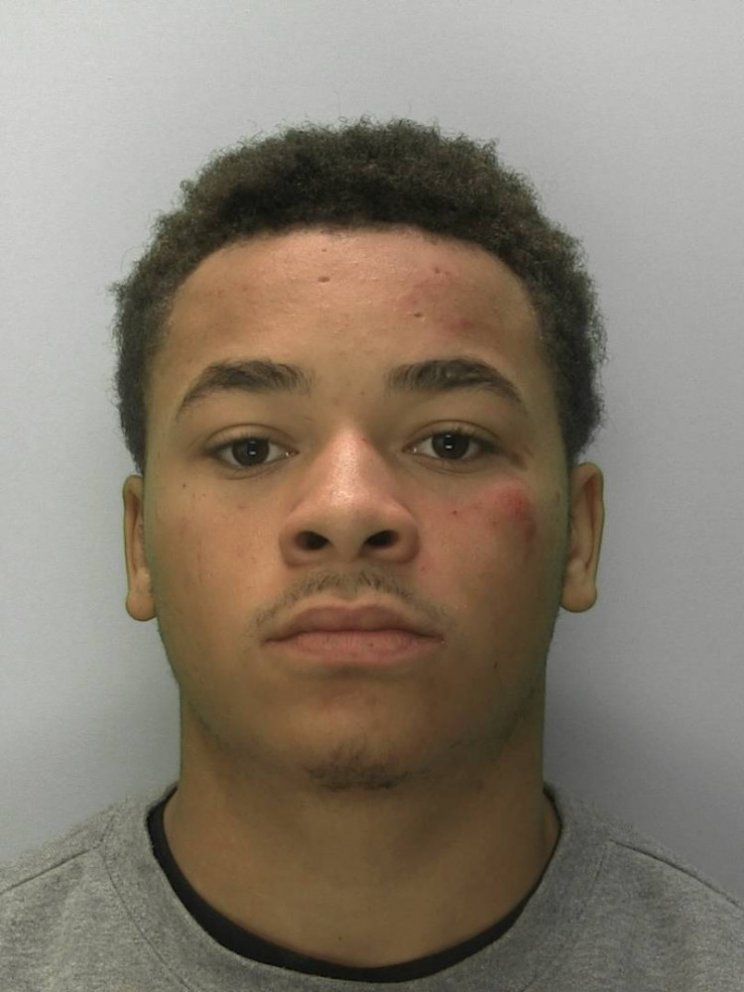 A young drug dealer who controlled and manipulated several children into peddling heroin, crack cocaine and cannabis for him in Gloucester has been jailed for six years nine months.

Prosecutor Edward Hetherington said Harrison first came to police attention when officers stopped a taxi driving erratically on the A40 between Gloucester and Cheltenham on May 12th this year.

"The taxi was stopped by police and when they spoke to the driver they noticed a strong smell of cannabis.

"Harrison, who was a back seat passenger, was carrying a rucksack and the police searched it. Inside it, the police found three black bags containing 186grams of cannabis that had a street value of £1,860, a number of mobile phones and some £2,600 in cash and other drug paraphernalia.

"One of the phones seized was the main number for the 'Chronic' drugs line. It was used to send out bulk messages using phrases associated with drug dealing."

But having his phone confiscated did not stop Harrison dealing in drugs, said Mr Hetherington. On July 23rd, Pc Lloyd Scotland saw a 16-year-old youth, who he believed had been recruited to deal drugs in the city, with another known drug user and witnessed a deal taking place.

"The youth was then joined by another 16 year old and together they walked to the home address of the second youth," said the prosecutor.

"The police gained access to the property and the second youth had £270 on him and a 'burner' phone. In his jacket pocket there were wraps of both crack cocaine and heroin."

An analysis of the second youth's phone revealed that he had been communicating with Harrison since May 16 and that there was evidence that he was being 'trained' to sell drugs in the city.

"This demonstrated that he had overall control of the 16-year-old boy," Mr Hetherington said.

The court was told that a week later, on July 29, the police spotted a different 14-year-old walking down an alleyway with a known drug user and witnessed a drug deal being carried out.

"The police gave chase and the youth discarded the phone and cash as he ran away. When he was stopped he had 28 wraps of crack cocaine and three of heroin on him.

"He also had a kitchen knife with the handle wrapped in cling film along with £838 in cash and a quantity of cannabis.

"Another officer, observing from a distance, spotted Harrison taking an interest in what had just happened.

"The youth's phone revealed that Harrison had been trying to contact the 14-year-old as he was being arrested. There were over 160 calls between them."

Harrison was eventually caught on August 6, said the prosecutor.

"Harrison was at his new home address in Worcester Street. When he was seen at the window at 1.40pm a known 17-year-old drug dealer arrived at that address.

"At 3.45pm police officers forced entry into the property and found the youth in Harrison's bedroom packaging drugs. There was a machete and a knife in the room and the youth had thrown 115 wraps and a mobile phone out of the window."

Mr Hetherington concluded: "Harrison is a very significant figure within the drug industry in Gloucester. He used children and other vulnerable people to carry out his operation from which he has benefited financially."

Lloyd Jenkins defending said: "Harrison has written to the court and he describes how he got into drugs.

"He has pleaded guilty to his offending and now accepts that drugs ruin lives and he regrets he got himself caught up in this dark and dangerous culture.

"Harrison says he has let the family down. As a young teenager he was often making himself useful as a volunteer with a number of charities.

"However his life changed when he started dabbling in cannabis.

"He accepts he has made some poor decisions. He might be perceived as a big fish in the Gloucester drugs pond, but there are others with more influence above him."

Judge Cullum said to Harrison: "Despite your age you have a significant list of previous drug convictions. You also committed these offences while you were subject to the terms of a community order.

"You were caught running the 'Chronic' drugs line and had others working for you.

"However letters submitted on your behalf show a different side to you.

"When you are released you will have a choice to make. Do you go back into the world of drug dealing, packaging drugs for a ready network of users and earn thousands of pounds or opt for a simpler life?

"You were caught on three occasions selling on a commercial scale. You targeted very young people or vulnerable drug users.

"Being the operator of the Chronic line you gained financially and you were quite successful at what you did. But it's time to leave that lifestyle behind."

Harrison was jailed for six years and nine months detention in a young offenders' institution.

The judge ordered that the £6,250 seized from Harrison should be donated to Gloucestershire Police's crime prevention and detection scheme and ordered the forfeiture and destruction of all the drugs and paraphernalia.