Find out about the new Ocean railway bridge

Cotswold Canals Connected is hosting an information event so people can find out more about the work to replace the railway bridge at Stonehouse Ocean.

The work will see the current bridge with its narrow opening replaced with a new, wider bridge that will be large enough for boats to pass under, with an integrated canalside footpath. 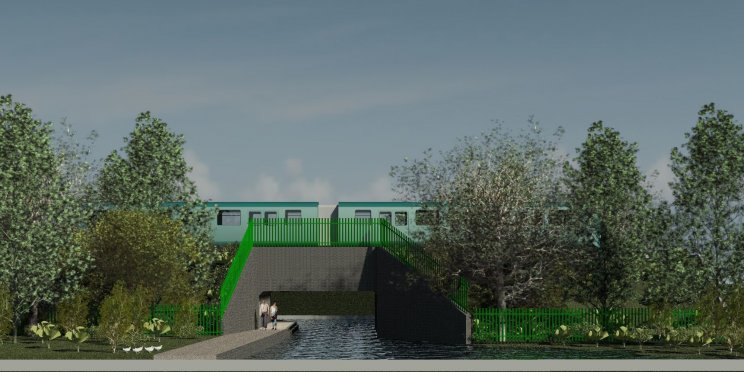 Network Rail is delivering the work on behalf of Cotswold Canals Connected and was originally due to install the bridge in late May. The work was rescheduled when surveys showed that deeper foundations would be needed to support the new bridge.

The work will now restart in October and the new bridge will be installed around the clock between 25 and 30 December 2021. The new bridge units have been cast on site as they are too large to transport by road, and will be lifted into place by a 1,000-tonne crane.

"This is the largest engineering project in the Cotswold Canals Connected programme, and is a vital part of our plan to connect the restored canal to the national waterways network, eventually making Stonehouse and Stroud canal towns once again. We appreciate some of the work will be noisy and we'd like to thank the local community for their patience while the project is completed."

To enable the works to be safely carried out an area of the Ocean will be gradually drained, giving wildlife the opportunity to relocate and adjust to the changing water levels. Although the main bird nesting season will be over, daily checks will still be carried out. When water levels return habitats will be reinstated, allowing water birds and fish to return.

For safety reasons, the canal towpath from Ocean swing bridge to Bonds Mill will be closed from 18 October 2021 to 6 February 2022.

The drop-in information event will take place at Stonehouse Court Hotel on 23 September from 4pm - 7pm. Representatives from Network Rail will be there to answer questions, as well as partners from the Cotswold Canals Connected project, including Stroud District Council, Gloucestershire Wildlife Trust, Cotswold Canals Trust and Stroud Valleys Canal Company.

The partnership is committed to significant outcomes for wildlife, people and communities, and our canal heritage.