A Gloucester man who drove at speeds up to 113mph on North Cotswolds roads after taking drugs has walked free from the city crown court with a suspended prison sentence.

Lewis Dixon, 27, of Tewkesbury Road, Longford, was stopped by police after he was spotted driving on the B4077 in the Snowshill area at 1.45am on February 22nd last year, Gloucester crown court heard on Friday.

Prosecutor Julian Kesner said when a police officer opened the door to Dixon's vehicle he suspected he was under the influence of drink or drugs because he had glazed eyes.

Mr Kesner added: "The officer returned to the police vehicle to retrieve the roadside breath test kits, but Dixon drove off at speed.

"The officer immediately followed and for the next two minutes he was driving at speeds in excess of 100mph in pursuit of Dixon - reaching speeds up to 113mph on the Tewkesbury to Stow road."

The pursuit came to an end in Buckle street, Snowshill, when Dixon collided with a tree on a slight bend before legging it into the woods, he said.

The court was told that Dixon was located a short time later by officers from Worcestershire and was 'sobbing his eyes out'. As he was arrested he was repeatedly saying, 'I want to die, I want to die'.

He was taken back to Gloucestershire Police's custody suite in Quedgeley where his drug reading for Benzoylecgonine, a metabolyte of cocaine, exceeded the machine's maximum of 800 micrograms per litre.

Dixon admitted driving a vehicle while unfit through drugs and dangerous driving.

Gareth James defending said: "Dixon was not a regular user of cocaine and he states that he has not touched drugs since the incident.

"He admits he made a disastrous decision to drive on the night in question. He is addressing his mental health issues and he has the responsibility for being the main breadwinner for his family.

"Dixon is a young man with a future."

Judge Michael Cullum said: "You drove at ridiculous speeds, putting yourself and others at risk.

"You were pulled over by the police but waited until the officer's back was turned before driving off.

"You were driving so quickly that an accident was the most likely outcome."

The judge sentenced Dixon to eight months in prison, suspended for a year, ordered him to complete 200 hours of unpaid work, pay court costs of £300 and a £140 victim surcharge.

Dixon was also disqualified from driving for 18 months and the judge ordered Dixon to take an extended driving test before he can drive on the road again. 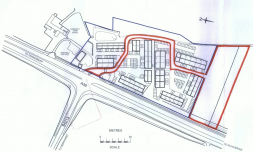