An impassioned speech from a 22-year-old drug dealer to a judge on Thursday (June 10) helped him to walk free with a two-year suspended jail term.

Ismail McCrae, of Beech Avenue, Acton Vale, London W3, explained from the dock at Gloucester Crown Court how he had been forced into dealing in Class A drugs more than two years ago to pay back his own cannabis debt - but he has now reformed and is intent on leading an honest and useful life.

He was sent to Cheltenham at the beginning of January 2019 to 'babysit' a cuckooed property for the drug dealer operating the 'Mikey' county lines drug operation in Gloucestershire, the court was told.

In an impassioned plea for leniency, McCrae told the judge: "I would like to apologise for being here today. This is not the life I had planned for myself. Throughout most of my life I have seen my father going to prison.

"I recall being aged nine. This is one of the most important times I needed a role model and father figure in my life. He was not there.

"But the day I committed that crime I could hear his voice asking me, 'Why would you want to waste your life as I have wasted mine?'.

"Even though my father had been involved in a life of crime, he was never one to glorify or encourage it.

"He always pushed me to educate myself and learn a skill I could make an honest living out of.

"Unfortunately, my life went downhill in 2018 when a close member of my family died, which put me in a bad place and sent me into depression during which I formed a smoking habit.

"I turned to cannabis, but this landed me in debt and only made my depression worse which led to me making a bad decision that I thought would be the solution to paying the money I owed back.

"How mistaken I was. Not because I was caught, but because of the impact had I not been caught. The impact it would have had on me by journeying down a path that would have ruined my life.

"This is why I pleaded guilty at the first opportunity because I wanted to take responsibility for my actions as I knew I wasn't that person in reality.

"When I acknowledge the seriousness of the crime I committed, I felt horrible. Unfortunately I was exploited by another individual for their own financial gain. Because of my depression it was easy for them to manipulate my mind.

"Over the last two years that I have waited to be punished for my crime I have tried to turn my life around in a proactive way.

"I've had time to re-evaluate my life and I realised how foolish I was back then to allow myself to be talked into committing such a crime.

"I now strive to be the best version of myself by being a good Samaritan whenever I possibly can.

"Which is why when the pandemic started I started working as a PPE operative providing essential staff at Queen Charlotte Hospital with the protective equipment they needed to stay safe while saving lives.

"I was happy to be of service. It was one of the most fulfilling jobs I have ever had in my life. I have also worked as a handyman for a housing company that renovates properties to keep myself busy.

"I am currently working as delivery driver. I have stopped smoking and I no longer have any contact with any associates in the drug world.

"Each day leading to me standing before you in the dock was a punishment itself, not knowing if I was going to be sent to prison or not.

"I have spent my time waiting for this court appearance trying to prove that I have changed my life and that I will not be back before the courts ever again.

"My life and my freedom is too valuable. I do not want to be like my father. I want to be better. I know that in the future I can be a contributing member of society if I am given a chance.

"I promise that I have learnt my lesson. I have seen the pain and heartache this has caused my family I do not like the person I was. I am no longer that person. Please allow me the opportunity to show that people like me can change."

The judge, Recorder Malcolm Gibney responded: "That was a well-crafted letter which was well presented." 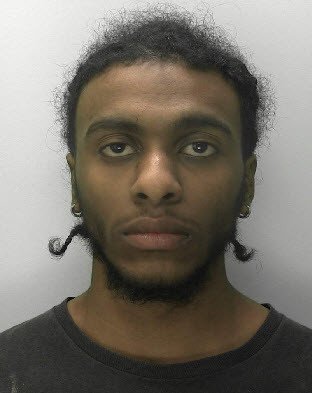 McCrae pleaded guilty to supplying class A drugs cocaine and heroin jointly with Mickel Kruythoff between December 28, 2018 and January 22, 2019 and the possession of quantity of cash as the proceeds of crime on January 21, 2019.

Recorder Gibney told McCrae: Your involvement in the county lines drug operation, the Mikey line was only for two weeks.

"County lines drug dealing is the scourge of the country and Cheltenham and Gloucester has more than its fair share.

"Its particular hard on the local population when people from big cities like London drop down to this location and use people like you to distribute drugs.

"Your role was relative low level and at the time you were 20 years old and had built up a small drug debt. You were then 'afforded' an opportunity by Kruythoff, your co-accused who was the driving force of the drug line.

"You were made an offer cash to help babysit a cuckooed property and distribute heroin and cocaine to local users.

"Your participation in the enterprise was for only two weeks. These two weeks has in effect changed your life, because prior to that, you had been doing well.

"However, you have demonstrated that you can be a worthwhile member of the community especially helping out the NHS at the outset of the coronavirus pandemic.

"Under the guidelines offences like the ones you committed normally attract a custodial term.

"However your short speech was impressive, and you articulated it well. You expressed appropriate remorse and understanding around the activity in which you were engaged.

"In my view therefore, there is the prospect of rehabilitation. You have come today within a whisker of being jailed, but I am prepared to suspend your two-year prison sentence for two years."

The judge ordered that McCrae complete 175 hours of unpaid work and the forfeiture of the cash seized on his arrest as the proceeds of crime.

"It's no fault of yours that this case coming to court today had been delayed. I hope this has been a lesson learnt."

A warrant for the arrest of Kruythoff, 23, of North Common Road, Ealing was issued by the judge, not backed by bail.