Gloucester History Festival is looking for people to share their memories as part of the City Voices programme at this year's event. 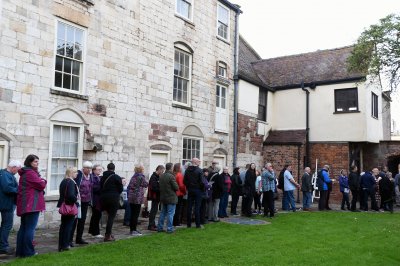 The 10th anniversary festival will run from September 5-20 with the theme of Voyages and Visonaries inspired by the 400th anniversary of the Mayflower's voyage to the US.

And the people of Gloucester are being invited to take part in a digital memory box project.

Part of a Gloucester Looking Up project, memories can be uploaded as images of written submissions, spoken and recorded, typed, filmed or a collection of images.

Dan Lusby from Squeaky Pedal, who have been commissioned to make the memory box, said: "Your memory could be about people, places, events, special family moments, celebrations or landmark occasions.

"But really, we are looking for those very special memories, those moments in time that are not necessarily connected to something big happening elsewhere.

"It is those small, cherished, blink and you miss them memories that mean the world to you that we are looking to capture.

"But they have to be connected to Gloucester."

Entries can be made via the festival website when it is updated early next month along with bookings for tickets.

The full programme is yet to be confirmed but kicks off with Gloucester Day on September 5, followed by City Voices events, Blackfriars Talks and Heritage Open Days, which are celebrating their 25th anniversary.