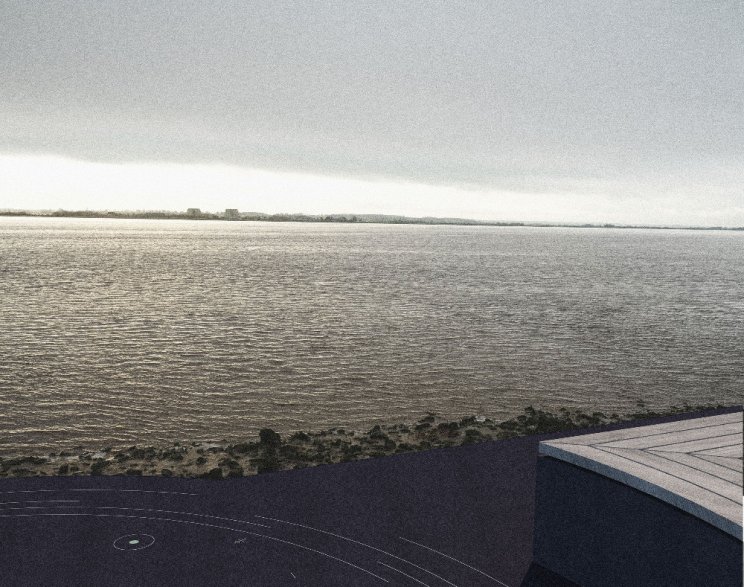 In 2020 artists Denman and Gould were commissioned to create two public artworks for Lydney Harbour as part of the Destination Lydney Harbour project, funded by the Coastal Community Fund.

After a period of research and consultation the artists have now released their initial concept designs for the new artworks which will continue to be refined and developed before being installed later this year.

The artworks and arts/ heritage-based walking trail form part of the Destination Lydney Harbour project. The £2.1m investment in the harbour has already seen the repurposing of the former store and mortuary into public toilets and a visitor information hub, soon to be open to the public. 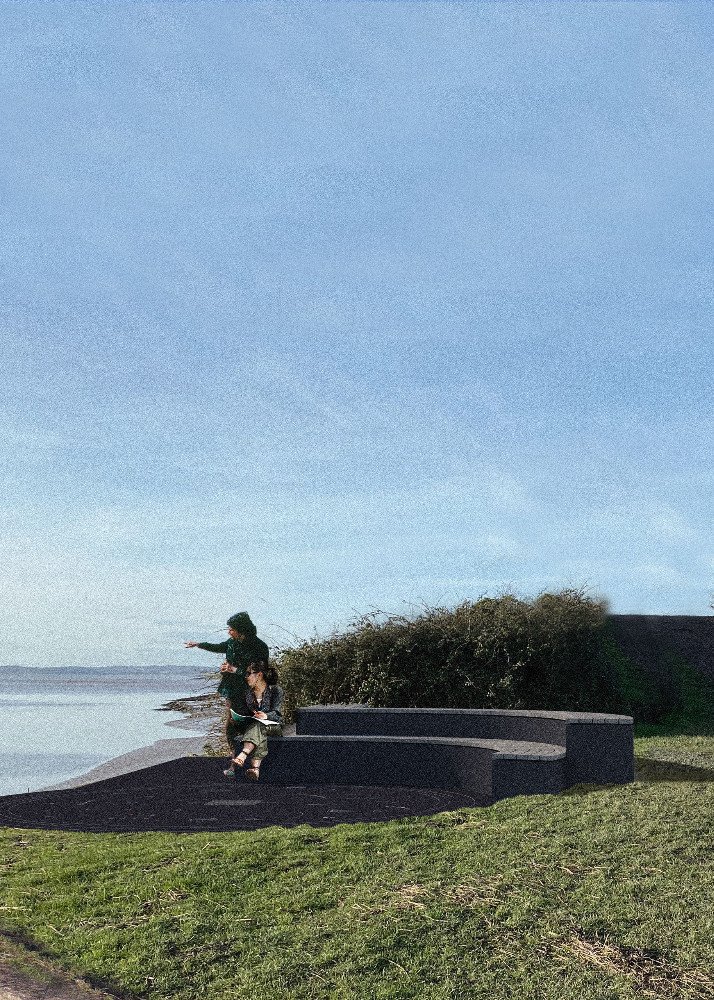 Alongside these refurbished buildings will be the much-anticipated new modular café building that will serve light refreshments to visitors. Also planned is the resurfacing of harbour road, the installation of a pedestrian footway and other improvements to the site, such as upgraded heritage information, and new mooring points.

The first of two pieces will be situated on the A48 roundabout at the top end of Station Road, Lydney.

Cllr Bernie O'Neill said: "I find this project absolutely fascinating, and, as a geographer I am particularly interested in the use of the geological colours and industrial history of the area in the artwork, which will enhance and benefit the harbour and also Lydney and the Forest. This will be a fantastic opportunity for visitors to understand the value of the harbour to the locality."

"It's been a real honour and privilege to start work on such a fascinating project, Lydney has become a place very close to our hearts. We hope our work at the harbour will support this use for years to come and become a much-loved part of this special place. A place to meet and dream." 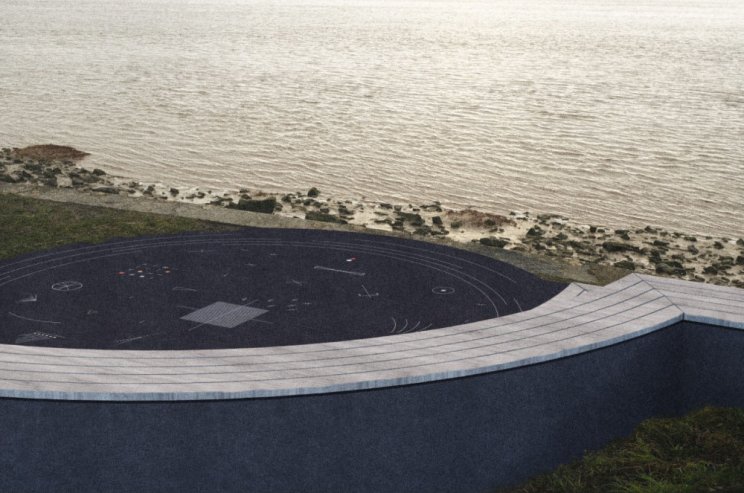 The concept and designs released at this stage are subject to change and refinement as further consultation takes place and permissions are sought.

Artists Denman and Gould describe their designs for the two artworks: "On their approach to Lydney visitors arriving via road, or on foot from the town centre, will be met with a visually striking and aesthetically beautiful circular band of colour that orbits the entire roundabout, marking a sense of arrival and the start of their discovery of Lydney Harbour. 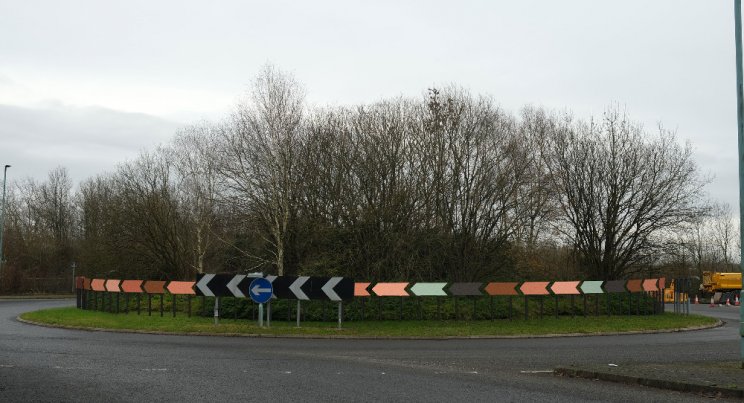 Its form mirrors the familiar directional road safety sign chevrons, but the colours tell a different story. The palette is taken from the Victorian Geological survey chart depicting the geology of the River Severn and the Forest of Dean. The circular colourful work at the roundabout connects visitors to the walking / cycling trail, as well as the road to the harbour. As you navigate around the roundabout the colours flow and pulse in your peripheral vision."

The second artwork will be an elegant viewing platform at Lydney Harbour, nestled into the natural landscape with tiers of seating to relax on and enjoy panoramic views of the River Severn. 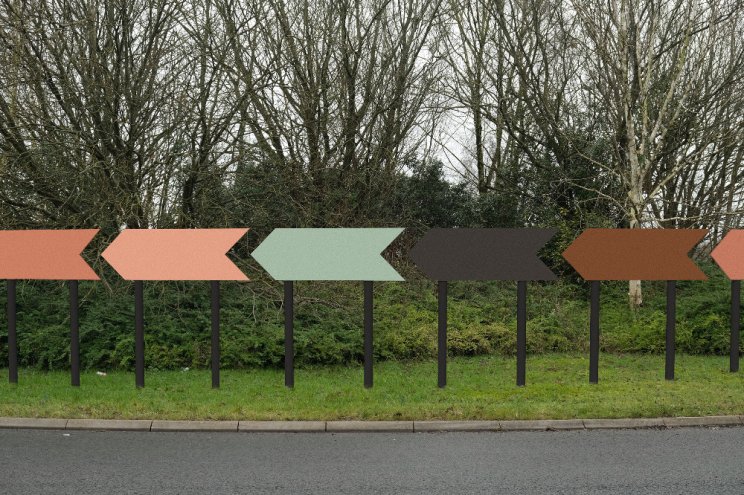 The artists have been inspired by the echoes of the industrial past, in particular, the former railway turning circle that is still just visible near to the proposed harbour artwork location. The two artworks will be linked by a walking trail along the old railway line that once carried coal-laden wagons to the harbour.

Artists Denman and Gould said: "We based the circular form of the platform on a technical drawing of the turning circle, which was used by the coal wagons to change the direction of their journey. The geometry of the circular form also holds symbolic qualities.

Our work at the harbour will be situated at the end of the walking trail creating a sense of discovery on arrival. It represents an endpoint, but also a turning point, both literally and metaphorically - a place to rest, contemplate, meet, gather, and then walk back. It marks the profound change in Lydney Harbour's use - from its industrial past to its leisure use today.

The trail links two circles, the first is the roundabout on the A48, which will also present signs and visual connectors to guide visitors to the second circle, the viewing point at the water's edge. Two circles used for changing the direction of a journey."