Demand for office space in the South West has slipped to its lowest reading since September 2012, the Royal Institute of Chartered Surveyors' UK Commercial Market Survey has revealed.

The survey added that the current impasse over Brexit is contributing to perceptions that the South West commercial property market is in the downturn phase of the property cycle.

The RICS report for Q3 2019 said that enquiries from investors are down at headline level and that 53 per cent of respondents believe that the market to be on a downward trajectory. 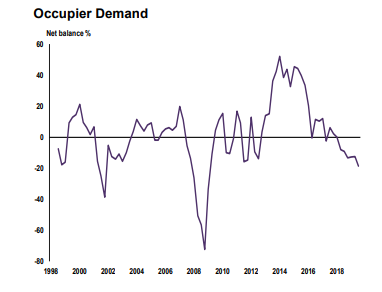 Occupier demand in the South West fell at the headline level once again, with the net balance slipping to -19 per cent, the lowest reading since June 2012.

Once again, the retail sector continues to drive the overall decline (net balance -62 per cent, compared to -54% in Q2).

However, demand for South West office space also fell during Q3, with a net balance of -8 per cent compared to -1 per cent in Q2.

Demand for industrial space has a net balance in the region of +12 per cent.

The region's retail sector continues to have large numbers of vacancies coming to market, prompting another increase in incentive packages on offer to prospective tenants.

Inducements are also on offer in the office sector with 17 per cent of respondents reporting a rise in the packages.

South West respondents to the survey project that rents for the coming three months are expected to rise in the industrial sector, the only sector to see any notable interest from tenants.

Unsurprisingly, the retail sector isn't expected to improve, some 63 per cent of respondents in the region expect to see further reductions in rents across the market.

Across the UK, retail rents are reading at the lowest level since the financial crisis (Q1 2009).

Looking further ahead, local respondents expect prime and secondary retail rents to fall for the year ahead.

The outlook has turned negative for secondary office rents in the South West, driven by weakening expectations in London.

By way of contrast, the industrial sector continues to return rental growth projections for the coming 12 months in the region.

Interest in investing in the local commercial property market fell again this quarter, with -5 per cent more South West respondents seeing a fall in investment enquiries.

Overseas investment demand also declined across the sectors with a net balance of -9 per cent of respondents seeing a fall.

Tarrant Parsons, RICS Economist, said: "Although a clear majority of respondents now perceive the market to be in a downturn, the fact that capital value expectations are still positive in many parts of the country suggests a relatively soft landing for the commercial real estate sector is anticipated overall.

"That said, the fallout for retail is altogether more severe. It remains to be seen what impact the latest Brexit developments have on confidence across the sector, but with the picture unlikely to become clear until into the New Year it may well mean hesitation continues over the near term."

Martin Smalley of Gleeds in Bristol added: "Brexit unsurprisingly has created an atmosphere of uncertainty in the regions.

"There are however hotspots around areas of significant infrastructure investment like Hinckley Point C which is fuelling growth across the commercial, retail, industrial and residential sectors."