Council base wins award for redevelopment

Shire Hall in Gloucester has won an award after undergoing a major transformation to turn it into an energy-efficient building fit for the needs of the 21st century. 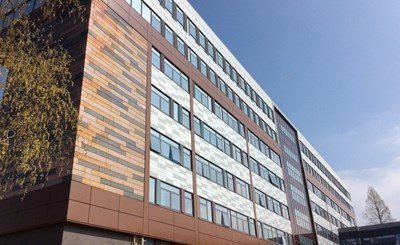 Gloucestershire County Council's headquarters was named winner of the best large commercial project in the Local Authority Building Control Excellence Awards for the West of England.

It comes after an ambitious programme lasting more than two years aimed at reducing its running costs and making more efficient use of public sector assets with designers Quattro and contractors Kier.

Solar panels - installed by Mypower - and highly insulated cladding systems have significantly reduced the building's carbon footprint and heating bills, ensuring it is self-sufficient over the summer months.

"The building is much more energy efficient which will cut carbon emissions and reduce costs and it has led to further investment in the area.

"We can also work more closely with our partners in the same building which will benefit the whole county."

The redevelopment has enabled the NHS, Gloucester City Council and police to share the building, saving money and ensuring more efficient use of the building and greater collaboration.

Shire Hall received the award for "building excellence in the delivery of outstanding construction and workmanship".