A huge Gloucester Rugby club fan died from contact with asbestos during his lifelong career in the construction industry, a coroner ruled yesterday (Tuesday). 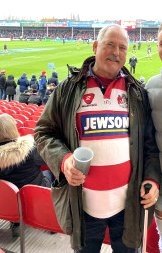 When Dennis Nicholas' funeral was held last week, mourners were asked to wear Gloucester shirts or something red because of his passion for the club.

The Gloucester inquest heard that after he was diagnosed with the asbestos-related cancer mesothelioma a year ago Mr Nicholas, of Far Sandfield, Churchdown, made a statement about his working life, describing how he came into contact with the deadly mineral right from the start in 1963, when he was an apprentice carpenter.

The asbestos contact at work went on until his retirement in 2013.

He stated that by 1968 it was common for him to be sawing through asbestos ceiling and roofing boards with a hand saw, often sanding them down to create a smooth finish - the effect of which created more dust.

He said that he later managed construction sites for a large company that used asbestos and that he was never warned about the health aspects of this material.

He said: "Asbestos was widely used in schools and I was the supervisor for these projects."

Respiratory specialist Professor Nick Maskell said that Mr Nicholas' exposure to asbestos at any of the companies he worked for would have been enough to bring on mesothelioma.

Gloucestershire assistant coroner Ian Dreelan concluded: "I have reviewed the evidence and I am satisfied that Mr Nicholas had a work history that exposed him to asbestos, and that he was not warned about the dangers that brought on his condition that led to his death.

"He was diagnosed with malignant mesothelioma in January 2019, which was related to his employment. He died from industrial disease on December 11, 2019."

Mr Nicholas is survived by his wife Rita, children Tracey and Lyndon, and three grandchildren.