Two Cheltenham men who stole luxury cars worth £340,000 in a series of burglaries across Gloucestershire - and also ram raided a shop and a cafe in the county - have been jailed for a total of 15 years between them. 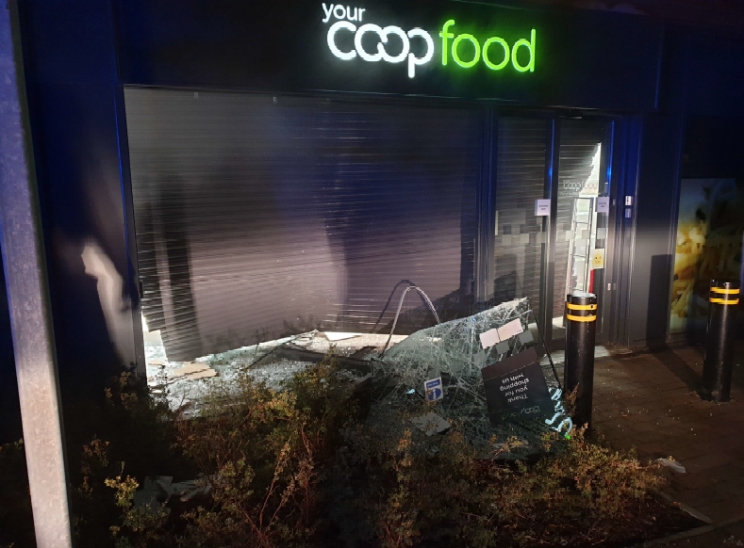 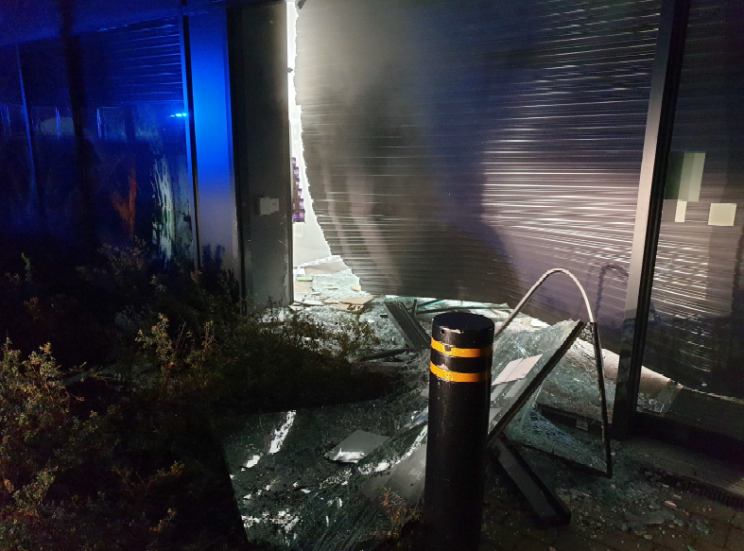 Matthew Jones, 26, of Overton Road and Eric Pearce, 25, of Pates Avenue, who sold many of the stolen BMW, Audi and VW cars in the West Midlands, pleaded guilty at Gloucester Crown Court to two charges of conspiracy to steal.

They asked for further charges to be taken into consideration by the court.

Mr Lee said that all dwelling burglaries took place between September 9 and November 9, 2021, and the two ram raids were committed on October 25, 2021.

"This was a very involved investigation by the police as there were a number of other burglaries and thefts linked to the conspiracy and both men have had these taken into consideration as part of their guilty pleas," he said.

He gave the court an outline of the trail of offences in chronological order:

The first burglary was in Bishops Cleeve, near Cheltenham, overnight on September 10/11 when a £50,000 Audi S3 was stolen. The vehicle was not recovered. Jones and Pearce arrived in a British Gas van that had been stolen in Churchdown, Gloucester, the night before.

The occupiers noticed when they woke up in the morning that the burglars had broken in by forcing a sash window.

This was followed by a burglary in Hailes Street, Winchcombe, overnight on September 12/13 when an unoccupied property was raided and a BMW X5 valued at £65,000 was stolen. This vehicle was also not recovered.

A handbag was also stolen. It contained sentimental items from deceased family members.

A police examination of Pearce's phone shows that on September 13, he did a Google Maps search for directions from Gloucester to Wolverhampton and it is believed many vehicles were driven to the West Midlands for disposal, said the prosecutor. Mobile phone site evidence revealed that both Pearce and Jones made the trip together and returned together back to Gloucester.

The third burglary occurred overnight September 15/16 in Leckhampton Road in Cheltenham when a VW Golf, valued at £35,000, was stolen, but was recovered from St Mary's Square in Gloucester. Entry had been gained by forcing a downstairs window that had been secured the night before.

The following night, September 16/17, a burglary occurred in Shurdington, near Cheltenham, in which an Audi SQ5, valued at £24,000 was stolen. This was recovered in the Kingsholm area of Gloucester.

Another burglary occurred in Bourton-on-the Water overnight on September 17/18 when entry was gained to an unoccupied property. A lump of concrete was used to smash a downstairs window. An untidy search of the house was made, during which cupboards were emptied onto the floor and a gun cabinet was broken into.

This cabinet contained jewellery, commemorative coins valued at £3,000 and some £2,000 in cash and an air rifle - all of which were stolen.

A video of the two men celebrating this successful burglary was filmed on one of their phones and played to the court.

The next burglary occurred at a property on Moorend Park Road in Cheltenham and involved only Pearce. An Audi S5 car valued at £17,000 was stolen. Jones and Pearce had travelled together to the West Midlands the following day.

The messages on Pearce's phone showed that he was selling the car from Birmingham and potential purchasers were told they would have to go to 'Brum' to pick it up. Again, the men filmed themselves on a phone showing how pleased they were with their efforts. The vehicle was recovered from the Birmingham area some time later.

The next burglary was in Winstonian Road, Cheltenham, overnight on October 13/ 14 and featured only Pearce breaking into an unoccupied property. He was disturbed by a neighbour while exiting the property and dropped the handbag he had stolen outside the house.

The burglars attempted to make their getaway in a Honda, but crashed the vehicle outside the burgled house and abandoned it. When it was recovered by the police it was found to have false number plates and its real identity revealed that it had been stolen from an address in Winchcombe overnight on October 5/6. Two other sets of false number plates were also found within the vehicle.

Overnight October 21/22 another burglary was reported at Bath Road in Cheltenham in which a BMW, valued at £40,000 was stolen and not recovered.

Another burglary was reported when a BMW, also valued at £40,000, was stolen from an address in St George's Road in Cheltenham. This vehicle was later used as a getaway vehicle following a ram raid on a shop later in the following days. The BMW was later recovered from the Warwickshire area.

Both men were involved in ram-raiding the Co-operative store in Bishops Cleeve during the early hours of October 25. At 2am a blue Astra vehicle that had been stolen a few days earlier was used to ram-raid the security doors of the supermarket. 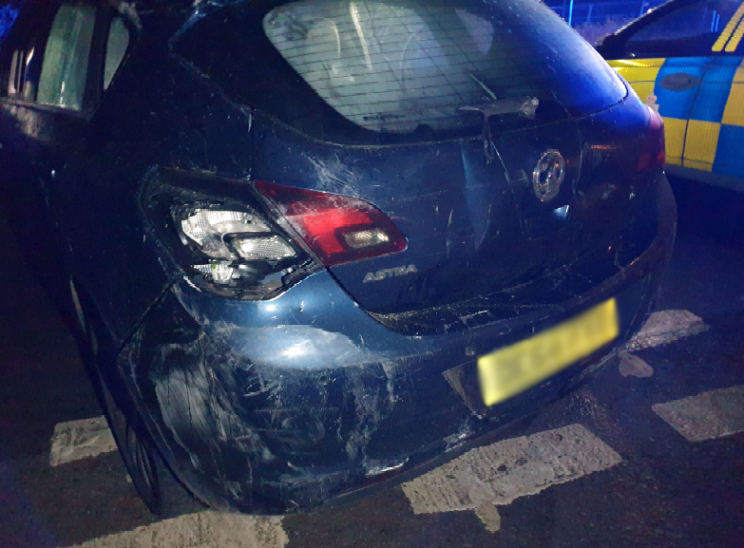 CCTV of the incident shows that the vehicle reversed into the security doors at least twice and the four burglars who entered the store tried to take cigarettes and the tills.

However, their actions had activated a 'smoke cloak' which meant they left empty-handed. They drove off in a stolen BMW. The damage to the security doors was estimated to be £80,000.

The BMW was seen arriving at Cheltenham train station about an hour later on October 25. Another Vauxhall Astra which had been stolen on October 23, was spotted close by and this was used to ram the doors of the Pumpkin Café at the train station.

Again the burglars had to leave empty handed, having caused some £40,000 worth of damage to the building.

Overnight November 1 and 2, a burglary was reported in Cirencester in which the occupiers were awoken by glass smashing and by the time they got downstairs their VW Golf, valued at £33,000 had been stolen. The car was later recovered.

The home owner said that they had installed security measures to the property, but it was obviously not enough to keep out determined burglars.

The final house burglaries occurred overnight November 7/8 at two addresses in Cheltenham, both of which were occupied. From one address a Honda, valued at £7,500 was taken and was later recovered. The second burglary the thieves stole a BMW valued at £40,000, but this has never been recovered.

The court was told that Pearce and Jones were arrested on November 9 and have been held in custody on remand ever since.

Judge Ian Lawrie QC said: "The scale of the defendants' offending is way outside the guidelines we work to. They will be receiving substantial sentences."

Natalie Goffe, defending Jones, said he accepts full responsibility for his offending and is anxious to put his offending behind him. She added: "He wants a fresh start in his life. He now has the full support of his partner. His offences stem from occurring a large drug debt. He tried hard not to commit further offending, but he had pressure applied to him.

"He has nobody else to blame but himself. He ultimately made the wrong choices. He turned to smoking cannabis following the death of a close member of the family. He has been taking positive steps to better himself whilst being remanded in custody."

Kate Roxburgh for Pearce said: "He had a difficult upbringing having spent some time in the care system. He has also spent time in custody. He is said to be doing well while being remanded in custody for these offences and is working with the professional bodies and is now motivated to change.

"He has a positive plan for when the future and hopes to use his qualifications that he has recently gained for bricklaying on construction sites when he is released. Pearce has shown genuine remorse for his offending. He is maturing into a sensible adult."

The court was told that both Pearce and Jones are now both 'enhanced prisoners' having gained the trust of HMP Hewell.

In sentencing Pearce and Jones, Judge Lawrie said: "The two defendants embarked on burglaries that were conducted over a three-month period. These were mostly domestic burglaries focusing on high value vehicles and sentimental property which totals some £340,000.

"The impact on the victims was evident by having the sanctity of their homes invaded. It is clear these burglaries were planned and the video clips I have seen show that they were liaising with others in the Birmingham area.

"Jones stated he was acting under pressure. I do not accept this submission. He knew exactly what he was doing and this offending was an escalation to what had gone before. The scale of offending suggests otherwise.

"Both defendants have previously received non-custodial sentences. This clearly failed.

"I have little doubt that away from burgling homes they are respectable men. It is a matter of regret that their respective partners will have to wait some time before they return home."

Turning to Jones and Pearce, the judge told them: "These burglaries were inspired by the high value of the vehicles in the driveways and driven by your greed.

"These offences are so serious that I have to step outside the guidelines to sentence you."

The judge sentence both defendants to a jail term of seven-and-a-half years each and ordered them to pay a victim surcharge of £190.