Are Clintons considering wrapping up parts of their business?

Closures could be on the cards for one of the country's best-known retailers as it battles against the costs of High Street rents.

According to Sky News, greetings card retailer Clintons are considering drastic moves to cut overheads with store closures one of the options being considered.

According to the report, Clintons have written to landlords to invite them to meetings to discuss the possibility of a CVA. 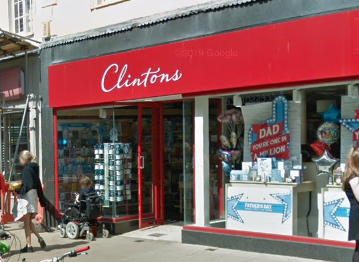 The Sky News report also reveals that KPMG - who this week were engaged by Mothercare to look at possible options to them - are working with Clintons as well.

Earlier this year, Clintons' parent company American Cards started to explore the possibility of selling the chain it purchased in 2012.

There are currently 332 Clintons stores across the country, specialising in greetings cards, novelties, wrapping paper and other birthday and festive gift essentials.

The meetings are scheduled to take place next week, according to the report, as Clintons builds up to its busiest time of the year in the weeks before Christmas.

The news of the Clintons struggles comes in what has been probably the most trying for the High Street so far.

Mothercare's problems come hot on the heels of the crisis at both House of Fraser and Debenhams.

Clintons have stores on Cheltenham's High Street and in King's Walk shopping centre in Gloucester.