Senior appointments at law firm as long-standing partner steps down

One of the county's longest established law firms has said a fond farewell to one of Gloucestershire's longest serving legal experts.

WSP's Nigel Sherwood (pictured below, centre) has retired after 35 years, bowing out as partner and head of property from a firm he joined in 1984.

Mr Sherwood, who qualifies as a solicitor in 1979, went on to become a partner at the Stroud-headquartered business in 1987 focusing predominantly in property law. 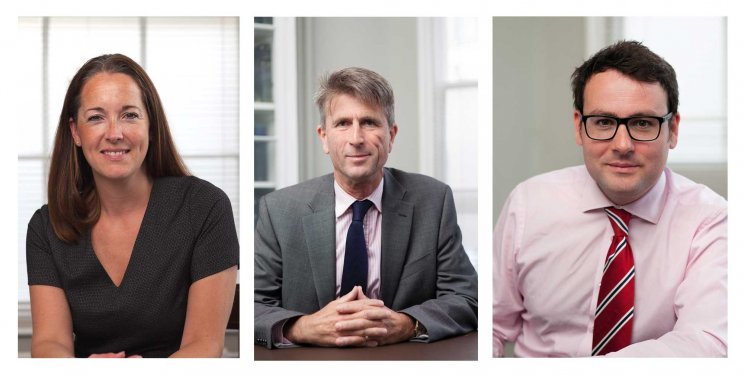 He thanked Judi Bonham and Peter Mardon, managing directors of WSP, and the whole team at the firm - which also has offices in Gloucester, Dursley and Nailsworth - describing them as "great people with tremendous skills".

Ms Bonham said: "Nigel has made a huge contribution to WSP Solicitors over the years.

"He has guided and supported us through significant change and I both personally and on behalf of everyone at the firm, would like to wish him well and thank him for his dedication and commitment to our clients and staff at WSP Solicitors."

In what it describes as "a pioneering move", WSP Solicitors has appointed practice manager, Joseph Mullis, as an invested director.

Mr Mullis, who has worked in the legal services sector as a practice manager since he graduated from university, said: "I am looking forward to working with Judi and Peter as a new team of directors, continuing the great work WSP already does.

"Growing the firm, through continuing to offer great Solicitors and providing the best service to the communities we serve is paramount."

Ms Bonham said: "Joseph has contributed significantly to the continuing growth and strength of WSP Solicitors and I look forward to the outlook a new non-lawyer director will bring".

Amy Leivers has also been promoted to an associate solicitor, expecting to take over from Mr Sherwood as the head of commercial property from the beginning of July.

Ms Bonham said: "Since joining us Amy has worked hard to maintain and grow the reputation of the department alongside Nigel Sherwood and is well placed to now lead that team".

Ms Leivers joined WSP in 2017, after qualifying as a solicitor in 2003. She has specialised in commercial property since then.

"We will continue to build the team and support the local business community" said Amy.

Ms Leivers and Mr Mullis will be based in the Stroud head office in Rowcroft.