Six Hartpury students and alumni took part in the Rugby Sevens competition at the Commonwealth Games in Birmingham.

Clementson's talents were identified from a young age, representing London Irish at U18 level. During his time at university, he lifted two BUCS Super Rugby titles at Twickenham and represented Bristol Bears in the Premiership Rugby Shield, culminating in an England Students tour to France, before representing Hartpury in the Championship.

Max Clementson said: "I loved my time at Hartpury. Dan Murphy is a fantastic coach, Sean Lynn - who was head coach when I was there - Chris Fortey, they helped me out tremendously."

Swannack began playing as a six-year-old with hometown club Wattstown and attended Ysgol Gyfun Cymer. He went through the Cardiff Blues Age Grade system and played for Coleg y Cymoedd in the Welsh Schools and Colleges League, before heading over the Severn Bridge to study at Hartpury. He represented Wales for the first time this January, in the HSBC World Rugby Sevens Series in Malaga.

Four Hartpury women were named for England. Double Olympian and former Level 3 extended diploma sport (performance & excellence) rugby student Abbie Brown continues to impress on the big stage. She was part of the British squad for the first Olympic sevens tournament in Rio and co-captained her side at Tokyo 2020 alongside England team-mate and Hartpury College alum Megan Jones, a former A-level student. Jones made her international Sevens debut aged 17, making her England's youngest ever women's player in the sport. 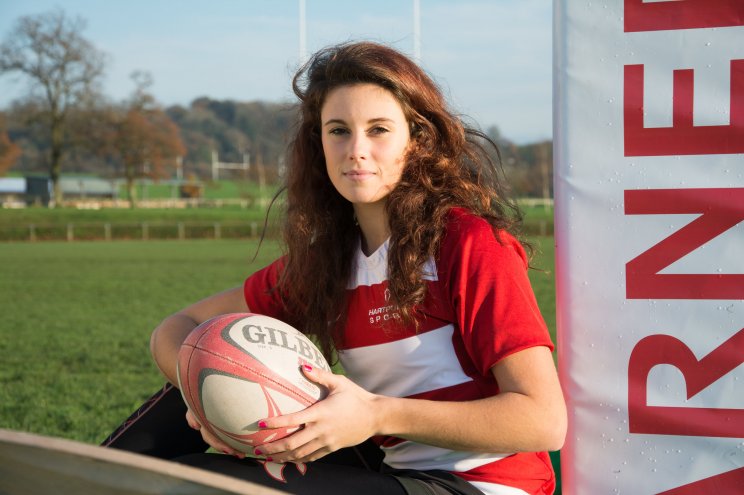 They're joined by former Hartpury College star Jade Shekells who, like Abbie Brown, was another player to be part of the hugely successful Advanced Apprenticeship in Sporting Excellence (AASE) women's rugby programme at Hartpury.

The Hartpury quad is completed by Alicia Maude, who currently plays for Gloucester-Hartpury. Maude started playing rugby aged six and was the only girl on her team until she was 11, when she had to play girls-only rugby.

Abbie Brown said: "I studied my BTEC qualification while it was part of the women's rugby AASE programme. Hartpury tutors were very supportive and allowed flexibility for us who had sporting commitments.

"If there wasn't this kind of flexible course, I wouldn't have been able to carry on with the rugby programme and probably wouldn't be where I am today and for that I am so grateful I had that opportunity."

Tom Radcliffe, director of elite sport at Hartpury, said: "It's very exciting to have the Commonwealth Games held here in the UK, and even more so given they're taking place just up the road in Birmingham.

"I'd like to congratulate the current and former Hartpury students selected to compete at the Games. They are hugely talented players who've shown the strength and determination to reach and remain at the top of their game.

"It's also yet another endorsement for our Sports Academies and the coaching and support staff that help our student athletes be the best they can be. We're proud of our Dual Career Pathway, that allows students to compete and improve their performance while studying a college or university qualification."