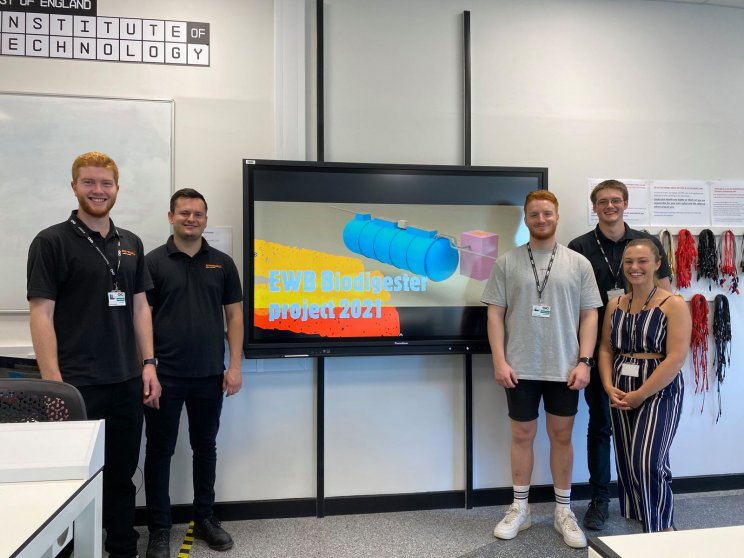 Five degree apprentices from Gloucestershire-based global engineering company, Renishaw, have been awarded second place for their entry in the UK's Engineering without Borders competition.

As part of the Engineering for People Design Challenge the apprentices were challenged to create an engineering brief based on real-world problems that would improve the lives of the people living in two towns in northern Peru.

The Renishaw engineers, who are studying for their degrees at the University of the West of England, Bristol, developed a solution for Lobitos and Piedritas, two towns that experience serious sanitation problems. The apprentices' solution consisted of a combination of biodigesters and oxidation ponds, that plumbs sewage through the system, creating a sanitary sewage system and turns waste into usable by-products. The system breaks sewage into clear effluent that can be processed and used for drinking water and sludge that can be used for fertiliser, providing a healthier area to live.

The team - Ella Brisland, Marcus Evans, Charlie Lodge, Ezra Price and Oliver Tutton - are currently in year one of a five-year Level 6 apprenticeship at Renishaw, in disciplines such as mechanical engineering, application support and design and development. The team was able to draw on experiences from their previous Level 3 apprenticeships during the challenge, such as confidence presenting their ideas to senior members of the company, working as part of a team to achieve a set objective and problem solving complex issues.

"The team was shortlisted from a total of 1,339 teams across the UK and Ireland, so being awarded second place is a brilliant representation of all the hard work they've put into the project, in addition to studying and holding down a job," explained Julia Russell, apprentice lead at Renishaw.

"The apprentices also competed against 75 teams to represent the University of the West of England, many of which were undergraduate teams with more time to devote to the project, so this in itself was a great achievement."

"Their success has elevated their standing and promoted the amazing work our apprentices are carrying out across the business," continued Russell.

"The team has been invited to give their presentation in a senior management meeting and news of their success was sent to the Board and all worldwide staff, so the whole company is celebrating with them."

"Seeing how far our design made it in the competition was a real eye opener to what can be done with a good idea and the drive to make it the best it can be," commented Marcus Evans, Design/Development Technician Apprentice at Renishaw. "The understanding we have gained from this competition will help us apply our socio-economic and environmental knowledge to the future engineering work we carry out in an effective and considerate way."

This summer, Renishaw opened applications for 60 apprenticeships across its Gloucestershire and South Wales sites, including; engineering, software and embedded electronic design and development. Other Renishaw apprentices who have received recent recognition for their achievements, include Ryan Harris, who was a finalist in the Tomorrow's Talent category of the Apprenticeship Awards Cymru 2021, and Matthew Hunter who won an IMECHE Frederic Barnes Waldron 'Best Student' award.

Azets, the UK's largest regional accountancy firm, has welcomed eight trainees to offices across the South West, as part of an ongoing recruitment drive for entry level jobs.

If you haven’t yet found an apprenticeship vacancy for 2021-22, Gloucestershire College has a range of opportunities across the county available now.