Lord Michael Bichard pledged to play an active role in supporting University of Gloucestershire's ambitions, with the focus firmly on students, at his official inauguration ceremony as new chancellor.

Lord Bichard's inauguration ceremony was attended by around 100 invited guests at the Gloucestershire Business School at the University's Oxstalls Campus in Gloucester. 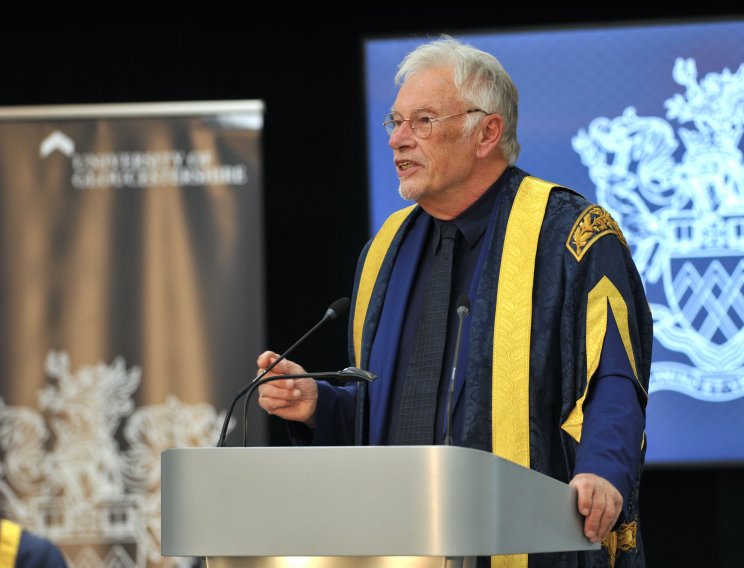 Lord Michael Bichard said: "To be appointed chancellor is a huge honour and I feel very privileged.

"I want to give you my pledge that I will do everything in my power to help the university succeed and to realise its ambitions during my time in office.

"I do feel a genuine affinity with the university's mission and values. You believe that the focus should be first and foremost on students - so do I.

In that capacity, he was involved in restructuring the county's further and higher education, which led to the creation of the university's predecessor organisation, the Cheltenham and Gloucester College of Higher Education.

He continued: "Gloucestershire is more than my adopted home. I've lived here on and off since I arrived as Gloucestershire County Council chief executive nearly 40 years ago.

"For me, Gloucestershire is without doubt England's finest county for its diversity, its history, its unrivalled contribution to the arts and crafts, its beauty and the warmth of its people.

"There is no other county, in my view, that comes close, and the university is one of its anchor institutions.

"For Gloucestershire to succeed, it needs a successful university, and to be successful, the university needs to work with the whole community, not least business, our thriving voluntary sector, other educational providers and people who don't see universities as a natural destination.

"I was the first person in my family to go to university and it changed my life. But as a child from a working-class family in Southampton, I was never made to feel like the local university cared about people like me.

"Despite our best efforts, there are still children in Gloucestershire who feel like I did, and that has to change. In every sense of the word, we need to be an accessible university and I'll do my best to help with that."

Lord Bichard has served as chief executive of the Benefits Agency, permanent secretary of the Department for Education and Employment, vice-chancellor of the University of Arts, London, chair of the Design Council and chair of the National Audit Office. He was made a member of the House of Lords in 2010 as a cross-bench peer.

Stephen Marston, vice-chancellor of the university, said: "I am so pleased that Michael accepted the role of chancellor. Michael understands what the university is about; our commitment to trying to help all of our students to be the very best they can be; to provide to our community long-term support; to wellbeing, welfare, growth, and to the personal and intellectual development for our whole community.

"I believe that in Michael we have someone who will be a huge advocate, supporter and champion of the values, purposes and mission of the university."