Richard Graham, MP for Gloucester, was the first or second MP to hire an apprentice, and said it was one of his best decisions as an employer over the last 40 years.

He said: "After the 2010 election, the new coalition government focused on rocket boosting apprenticeships across the country - expanding funding and widening sectors, courses and opportunities for both the young and not so young. Many small businesses were sceptical.

"Taking on an apprentice, they would say, was time consuming, bureaucratic and expensive: they didn't have an HR or the time to do this sort of thing." 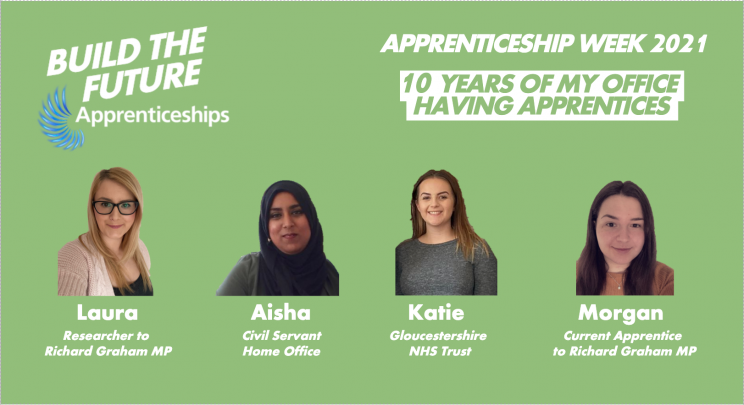 So Mr Graham used his own experience to explain the benefits and value to an employer and to reassure them that it would be one of their best investments, as it was his.

Ten years on, he feels few would disagree with him.

Mr Graham's apprentices have all moved on with a Level 3 in business admistration and a wealth of experience. They have moved on to jobs in a training company, the Home Office, Shire Hall, the Pied Piper Appeal charity and the mental health team at Gloucestershire NHS Health & Care Trust.

He added: "My first apprentice, Laura Brooker, became Gloucester's youngest ever councillor (also vice chair of the licensing, enforcement & audit committee). She has now come back as my researcher - making a huge difference to our city on a range of different projects."

It is not just the city's MP who has been ahead of the game with apprenticeships. There are opportunities across the city and the county.

Mr Graham said: "Last September, apprenticeship minister Gillian Keegan visited Gloucestershire College, opened their new cyber degree apprenticeship and presented a Beacon Award for the Promotion and Delivery of Successful Apprenticeships. What a great achievement for GlosCol and our city!"

In Gloucester and across the county, there are apprenticeship opportunities in sectors from business, construction and engineering to hairdressing, care and hospitality from a variety of training providers. Among recent popular innovations, nursing associates now follow a two year Level 5 higher apprenticeship at the University of Gloucestershire.

Mr Graham concluded: "This Apprenticeship Week, even though so much of business is on hold at the moment, let me blow the trumpet for apprenticeships, the employers who offer them and the colleges and organisations (like Gloucestershire Engineering Training) that train them."