Lucozade is part of Suntory Beverage & Food Great Britain and Ireland, which has a bottling plant in Coleford.

The Apprentice Nation platform, which uses music to inspire and engage with young people to get career ready and build core skills for work and life, has reached millions of young people, providing them with the tools they need to succeed.

But recent research shows that the rate of inactivity amongst young adults is almost at an all-time high and unemployment is significantly greater for young people (13.1 per cent) compared to the whole population (4.7 per cent).

A separate study shows that people from underrepresented minority ethnic communities are more than twice as likely to be unemployed. 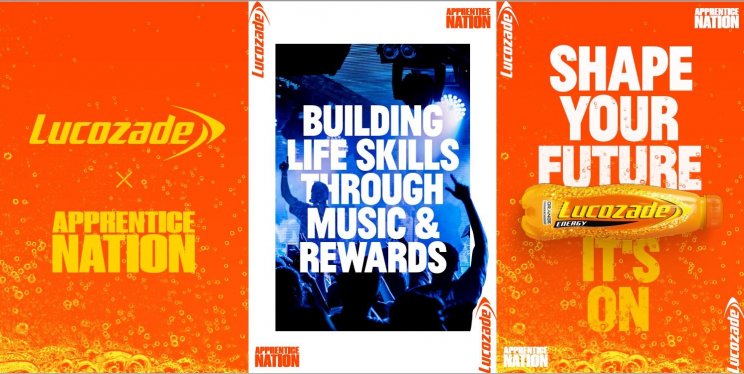 Lucozade, working with Apprentice Nation and lead partner BT, is hoping to play a role in tackling these issues, in a way young people find meaningful and accessible.

Lucozade will use brand recognition and scale to recruit participants and drive awareness of the work with Apprentice Nation across the UK and Ireland, highlighting how young people can get involved to help unlock their potential.

The brand is aiming to help 16-24 year olds find their confidence through the power of music by collaborating with Apprentice Nation on a series of webinars and on-demand content, featuring artists from an upcoming concert, as well as offering life and work skills, tips and tricks through its edu-tainment platform.

Lucozade will specifically take charge of a new educational pillar to set young adults up for success called Unlock Your Potential. The free-to-access content will help them to harness the power of self-belief and develop a growth mindset, inspiring the future leaders of tomorrow to act.

As well as boosting young people's sense of purpose, Lucozade and Apprentice Nation believe the initiative will give 16-24 year olds the opportunity to build their confidence and deal with complex issues like grief and loneliness, as well as understand topics such as wellbeing and emotional intelligence.

Employees across the brand's business will also support the Apprentice Nation mentor programme by advising and showcasing the career opportunities available to young adults in the FMCG (fast moving consumer goods) sector, which they may have not have otherwise considered.

The partnership supports the company's wider Growing for Good vision, which aims to invest in communities as part of its Giving Back to Society values.

Matt Riches, strategic partnerships lead at SBF GB&I, said: "Lucozade will be leveraging its scale and reach to drive awareness of Apprentice Nation and the Unlocking Your Potential curriculum with a high-profile multi-media campaign launching this autumn.

"While potential is universal, opportunity isn't, and so through this partnership with Apprentice Nation, we will highlight career opportunities and provide meaningful training for young adults from underrepresented communities."

Stephen Greene CBE, producer of Apprentice Nation, said: "This partnership allows for an entirely new strand of curriculum - and Lucozade is well placed to unlock potential. Lucozade is one of the most loved British brands and we are proud to be working with them on our aligned mission to inspire the next generation and help them to shape their future."

Apprentice Nation aims to highlight alternatives to university, such as apprenticeships, that young people might not have otherwise considered. Eighty-five per cent of Apprentice Nation participants to date have gained at least one new work-ready skill and 75 per cent reported an increase in confidence for themselves and their future.

Azets, the UK's largest regional accountancy firm, has welcomed eight trainees to offices across the South West, as part of an ongoing recruitment drive for entry level jobs.

If you haven’t yet found an apprenticeship vacancy for 2021-22, Gloucestershire College has a range of opportunities across the county available now.