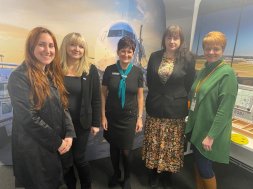 VIDEO: Aim High to find out about airport careers

Local aviation charity fly2help visits schools and colleges around Gloucestershire to showcase the careers in the aviation industry through its Aim High programme.

Local businesses are invited to join Gloucestershire College on February 17 for a morning of breakfast, networking and talks with guests Amazon Web Services.

Engineering firm Renishaw has a number of IT apprenticeship vacancies available.

The Government is calling on universities to be upfront about the amount of online learning students will receive.

With National Apprenticeship Week just around the corner, Gloucestershire College is looking for help from former apprentices.

Cybersecurity is set to dominate industry decision-making and careers more than ever before, writes Professor Kamal Bechkoum.

The Growth Hub Stroud is offering a free crypto currency workshop next month.

The number of tech jobs in England and Wales reached record levels in 2021, according to a new report.

A specialist adviser from the Department of International Trade is the guest speaker at the next University of Gloucestershire webinar.

A new agricultural research partnership will be launched at the Royal Agricultural University (RAU) in Cirencester today (January 27).

£4,000 incentive to teach at Gloucestershire College

Gloucestershire College is growing its team of lecturers and assessors to support the STEM sector.

Cheltenham-based Spirax Sarco is offering specialised training to a range of businesses.

Could you spare an hour or two a week to mentor and support young people?

Applications are open now for law graduates looking to take the next step in their training.

The new Gloucestershire County Council Employment & Skills Hub has a number of opportunities for people looking to support others.

DigiBus heads for Cheltenham and Gloucester

Free digital learning sessions will be available on board the DigiBus in Cheltenham and Gloucester over the next few weeks.

Businesses from all industry sectors have an opportunity to improve cyber knowledge at their organisation with University of Gloucestershire.

South Gloucestershire and Stroud (SGS) College has started a course to help ex-offenders and former addicts start a career.

Alan Dane has been appointed as the new headteacher of The Forest High School in Cinderford, following the anticipated retirement of John Whitehead.

UoG research may find answers to causes of human diseases

New University of Gloucestershire research aims to increase understanding of human diseases, potentially leading to better treatments in the future.

Dame Fiona Reynolds DBE has been appointed as the chair of the governing council of the Royal Agricultural University (RAU).

A former Cirencester College apprentice has become the first person to complete a Level 4 apprenticeship in PR and communications at the college.

Apprentice incentive payments of up to £4,000 until end of month

If your business has ever considered taking on an apprentice, now could be the time to take the plunge.

Tarmac, the sustainable construction materials business, has announced the biggest graduate and apprenticeship recruitment drive in its history.

Two University of Gloucestershire students have been selected to play netball at the highest level of student sport in England.

Severn Stars – an elite sport partnership between University of Gloucestershire and the University of Worcester – has appointed a new general manager of the Vitality Netball Superleague franchise.

A former Hartpury University student has received an award from the South West Ambulance Service, after saving the life of a man trapped in a burning building.

SGS College has a number of apprenticeship vacancies in the county available with a January start.

University of Gloucestershire student Chloe Robyns-Landricombe has been crowned British champion in the showpiece finale to the domestic judo season.

Hartpury University and Hartpury College has appointed its next vice-chancellor, principal and CEO.

Families from King’s School in Gloucester have been providing much needed support to those in the community most affected by the pandemic.