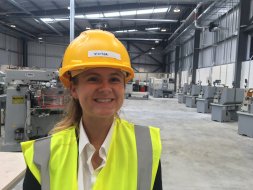 Women could help to fill the estimated 210,000 vacancies in construction, but gender inequality is still a big issue in the industry.

Stroud District Council has confirmed its commitment to the regeneration of the Berkeley area, despite a lack of certainty from the Government.

A Gloucester-based company is offering 50 fully-funded places for veterans to attend its virtual Cyber Academy workshop.

Cheltenham risks losing its science and tech firms due to talent shortages, according to new a report released today.

University of Gloucestershire has successfully applied for teacher training reaccreditation, earning recognition for the quality of its programmes.

This Hospice Care Week (October 10-14), an occupational therapist at Sue Ryder Leckhampton Court Hospice is highlighting the rewards of a career in palliative care.

Education charity appoints experienced farmer to board of trustees

A Gloucestershire-based charity has appointed Ian Pigott OBE as a trustee.

Gloucestershire County Council is preparing an application to the Department for Education to establish two new special schools in the county.

Cirencester College A Level students recently had the opportunity to collaborate with a local designer.

Cheltenham-based Hazlewoods is holding an Accountancy Academy for 6th formers during half term.

Construction firm Kier is one of the first employers in England to offer apprenticeship opportunities to prisoners.

Gloucestershire College has a series of open events for prospective students coming up in November.

Two county institutions have made it to the finals of the Green Gown Awards.

More than 300 people attended a one-stop-shop recruitment event at Cheltenham Racecourse, with a large number fast-tracked into health and social care jobs.

Hartpury has been named as the no.1 specialist STEM university for local growth and regeneration.

University of Gloucestershire’s role in supporting regional growth and regeneration has been recognised in the latest release of the Knowledge Exchange Framework (KEF).

Gloucestershire Gateway Trust is holding an employment skills course next week, for anyone interested in working at Gloucester Services.

Skills Bootcamps are back at Gloucestershire College

Gloucestershire College is once again able to offer ambitious individuals a chance to fast-track to a new career for free from October.

Gloucester-based Davies and Partners is delighted to announce that Matthew Verrier has qualified as a solicitor, following the completion of his training.

Legal firm grows its own talent

Almost half (45 per cent) of UK tradespeople want to do additional training, but are unable to do so because of barriers like time and finances.

One Gloucestershire is holding a health and social care recruitment event on Wednesday (September 28).

The Royal Agricultural University (RAU) in Cirencester has been ranked in the top 10 universities in the UK for the best student experience.

Cirencester College is holding an open day for prospective students next month.

University of Gloucestershire has renewed its partnership with the Football Association to operate a national Women’s High-Performance Football Centre.

Adult Education in Gloucestershire has education and training courses available from October.

Hazlewoods accountants and business advisers have taken on a record number of apprentice recruits this year.

Hartpury University ranks first in the South West and sixth in the UK for teaching quality.

Working as a freelancer while a student has two big advantages – work experience and money!

Not too late to enrol at college

For students who aren’t enjoying year 12, there is still time to enrol at a college in Gloucestershire.

Supermarkets most popular companies to work for

Retired people going back to work

Rising household bills mean people are coming out of retirement and going back to work.

It’s been four years since Gloucestershire College opened its Forest campus in Cinderford.

Advanced Russian speakers are being sought by GCHQ as part of a Government recruitment drive in response to the war in Ukraine.

Professor Andy Collop has taken up the post of vice-chancellor, principal and CEO at Hartpury University and Hartpury College.