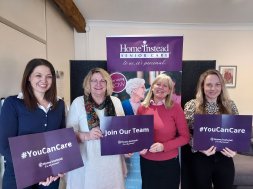 Local care company set to boost employment in the area

Whilst many businesses have been hit hard by the pandemic, one local company is looking to hire 50 people, with or without experience.

From student to lecturer – it’s good to talk

A former University of Gloucestershire student turned lecturer will be sharing his story live online next week.

More than 60,000 people have applied to study nursing this year – up a third on last year, according to UCAS.

A brand new independent department store set to open in Stroud in April is recruiting for a number of roles.

Agriculture students at Hartpury will benefit from the arrival of an exciting new addition to its award-winning commercial farm – a herd of 50 pedigree Guernsey cattle.

Top tips for starting a career in tech

If you are considering a career in tech, check out these ideas to set you on the right path.

Supermarket chain Asda will donate £2 million to small businesses to help fund around 400 apprenticeships in local communities across the country.

Two Cheltenham schools will provide expert advices to other schools in the county, following an announcement by the government.

The Co-op is set to improve employment opportunities for individuals from under-represented groups, by channelling money from big businesses to smaller firms.

New head of animal and agriculture excited about Hartpury’s future

The new head of animal and agriculture at Hartpury University is relishing the opportunity to enhance its reputation as a leader in industry-led research.

During National Apprenticeship week this week, discount retailer Aldi has announced it will recruit more than 200 apprentices this year.

During National Apprenticeship Week this week, local companies are reassuring young people that they are still taking apprentices on, despite the pandemic.

Exercise videos have positive impact on pupil experience and focus

A series of exercise videos for children produced by a Hartpury University PhD student has had a positive impact on classroom behaviour.

Innovative agri-tech jobs for the future at Hartpury

Hartpury University and College have a number of jobs for the future, working on an innovative new project, available to applicants right now.

Gloucestershire County Council has funded training for nearly 150 apprentices in local businesses since the start of the Covid-19 pandemic.

This year’s University of Gloucestershire biosciences essay competition drew a record number of entries, with 207 essays received from 57 different schools across the country.

The number of digital apprentices going through end-point-assessment by the industry’s professional body has increased ten-fold over the past two years, new figures show.

The Institute of Directors (IoD) in the South West is holding an online event tomorrow (Tuesday 9th February) to tie in with National Apprenticeship Week.

Students at two Gloucestershire schools will benefit from learning in world-class education facilities, after the government announced the first participants in a new £1billion transformation programme.

Over 75 per cent of apprentices at Gloucestershire Hospitals NHS Foundation Trust go on to find permanent work there, according to the latest figures.

Ahead of National Apprenticeship Week next week, Amazon has announced it is recruiting more than 1,000 apprentices.

Hartpury has again been judged among the cream of the crop in the UK agriculture industry, after landing another national award.

A Gloucestershire-based reading charity has donated books and comics to support the county’s children.

National Apprenticeship Week: A reminder of our work future after lockdown

Apprenticeships are a hugely important part of the economy and are crucial for businesses of all sizes for long term growth.

Digital job surgeries launched to help 160,000 Brits get back into work

More than 150,000 jobseekers across Britain will benefit from new employment support, helping them build their interview skills, find local vacancies and quickly get back into work.

Hospice’s hope for future as it welcomes new fundraising apprentices

As the coronavirus pandemic continues to have a devastating impact on both the job market and charity fundraising activities, Sue Ryder Leckhampton Court Hospice has appointed two new apprentices to its fundraising team.

The cyber security profession has a global shortage of expertise available.

Hartpury has launched its first-ever competitive rowing club aimed at providing students with more opportunities to train and compete in a high-level environment.

ITV Studios has announced a new Production Trainee scheme, which will fast-track new and diverse talent into a variety of roles.

Whether you are in a job at risk, have been made redundant, or would just like to improve your future job prospects, Adult Education Gloucestershire can help.

Find out more about degree apprenticeships

To coincide with National Apprenticeship Week (8 to 14 February), the University of Gloucestershire will join a panel discussion: Degree Apprenticeships, Understanding the Opportunities.

Sometimes you need to brush up on your workplace skills or learn something new – and Gloucestershire College has the courses to suit you.

With so much uncertainty around, it feels like National Careers Week (1st-6th March) will be needed more than ever in 2021.

Hartpury rugby alumni out in force at Six Nations

Join the creators and makers of the future with Gloucestershire College

If you're aiming for a career in the ever-growing engineering, cyber and computing industries, Gloucestershire College, part of the West of England Institute of Technology, is the place to develop after your college course or A Levels.

During National Apprenticeship Week 2021, Gloucestershire College's Business Hub team invites you to virtually join them to discover apprenticeships and the incredible impact they are having across the county.