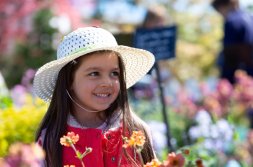 Join the celebrations at the RHS Malvern Spring Festival

The RHS Malvern Spring Festival in association with My Pension Expert will have plenty to celebrate when it makes a triumphant return on the 5-8 May 2022 after a two-year break.

A Gloucester woman is appealing for suggestions for great Gloucestershire walks to help her raise £2,022 for a county charity in 2022.

Visit the 'Daffodil Village' at the heart of the Golden Triangle

For the first time since 2019, Spring public events to celebrate the glorious wild daffodils in the Golden Triangle are back on in Dymock and Kempley.

Plenty of fun for the younger ones at Cotswold Farm Park

As well as starting its Lambing and Kidding event from today (February 14), Adam Henson's Cotswold Farm Park is laying on special events for younger children this week.

Celebration of contemporary art in a beautiful English garden

Fresh Air Sculpture is a contemporary sculpture and craft show taking place in the extensive gardens of Quenington Old Rectory, Gloucestershire, from 5 – 26 June.

Stereophonics. The Human League, the Sugababes and Anne-Marie are among the big names set to play at this summer's Big Feastival.

Enjoy beer, rugby and the great outdoors at Ale Amble

Stitch story is an ambitious new project to bring together 15,000 Tewkesbury residents in one wonderful new community embroidery.

Fine food for a fine cause

A charity lunch club which meets once a month for fine dining at venues in and around Cheltenham is for everyone..

Cyclists invited to 'Ride for Ryder' for hospice

Keen cyclists are being urged to saddle up for a ride around the Cotswolds in aid of a Gloucestershire charity.

Does your child love to sing? Applications to become a Gloucester Cathedral Chorister are now open from girls and boys, aged six to nine.

Back with their biggest comedy catastrophe to date, multi award-winning Mischief return to the stage with their hilarious new show.

An art show, titled “Shoes Have Names”, has opened at Cirencester’s New Brewery Arts following a grant facilitated by a local councillor.

A night of foot-stomping bluegrass

Flats and Sharps, a four-piece bluegrass outfit from Penzance, Cornwall, are playing a concert at Tetbury Goods Shed on Saturday, February 12.

History with the nasty bits left in!

We all want to meet people from history. The trouble is everyone is dead!

A one-day sustainability festival is to be held at St Phillip’s & St James’ Church, Leckhampton, in February.

Preparations for the Queen's Platinum Jubilee in Gloucestershire are being stepped up.

The Greatest Show on Earth

Audiences are being invited to run away with the circus when Shone Productions brings international circus acts, amazing magic, and lots of laughs to the Bacon Theatre on Wednesday 23rd February at 3pm.