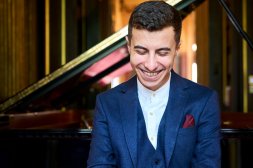 Painswick piano performance is “One to Watch”

Iyad Sughayer is due to perform in May 2022.

Sue Ryder Leckhampton Court Hospice is calling on people across Gloucestershire to sign up to the Cotswold Way Challenge and raise vital funds to support its specialist palliative care and bereavement support.

As UK radio celebrates its 100th birthday, writer and broadcaster Tim Blackmore returns to Chapel Arts in Cheltenham to share some wireless history.

The Dean Forest Railway celebrated 50 years of operation in 2021 and now runs along a 4½ mile restored route in Gloucestershire.

An exhibition of stunning kiln-cast glass art by internationally acclaimed artists will open at The Museum in the Park, Stroud, on 1 May, during the UN’s International Year of Glass.

Homage to iconic guitarists from the past 50 years

The Story of Guitar Heroes comes to Cheltenham Town Hall on Monday, April 18th at 7.30pm.

A Celebration of Ella Fitzgerald

Join chanteuse Louisa Revolta for a celebration of the music sung by Ella Fitzgerald at Tetbury Goods Shed.

It's all happening at Westonbirt this Easter!

Around the Easter Bank Holiday, Westonbirt Arboretum will be playing host to several exciting, educational, and out of the ordinary experiences which can be enjoyed by all the family.

A Cheltenham woman who has been heartbroken by the situation in Ukraine is organising a virtual running event to raise money for the people of the war-torn country.

This spring, Cotswold Farm Park is delighted to announce the launch of its sunflower growing competition, ahead of their popular Flower Field event returning in the summer.

Raft race better and wetter than ever!

Stroud’s legendary raft race is back – and it’s going to be bigger and wetter than ever, according to its organisers, Cotswold Canals Trust.

Hop along to 'chick' out Easter fun day

Families in Gloucestershire can be like the Easter bunny and hoppity hop into the Easter holidays by enjoying a free Easter Food, Drink and Craft Market at a popular pub.

World Pro Wrestling brings incredible, international professional wrestling talent from all over the world...and it's coming to Cheltenham!

A tastebuds tour of the Forest of Dean

Follow the Delicious Dean Tastebuds Trail, a culinary itinerary curated by Visit Dean Wye as part of its new Find Your Freedom campaign.

Celebrated Cotswolds singer-songwriter Johnny Coppin is launching his new album at a concert at Cheltenham's Bacon on Thursday, April 7, at 7.30pm.

Giffords Circus is back on the road

Gloucestershire-based Giffords Circus is back on the road in 2022 with a brand new show ¡Carpa! for its biggest ever UK tour.

The hotly-anticipated show - The Ultimate Boyband Party Show – is ready to body roll into Tewkesbury, on Saturday 9th April.

Celebrate Easter with Cotswold Farm Park and join their egg-stra fun activities which are guaranteed to get your little one hopping around with excitement!

The favourite family event in the Cotswolds, The Cotswold Show and Food Festival, is taking place Saturday 2nd and Sunday 3rd of July in Cirencester Park.

Cheltenham Science Festival is back at full scale for its 20th birthday, running from Tuesday, June 7, to Sunday, June 12.

Miranda takes on three halves, two tris and a marathon

It’s a tale of three halves, two tris and a marathon for one young woman from Gloucestershire preparing for a year of challenges to raise funds for Sue Ryder Leckhampton Court Hospice.

Henry VIII along with his many wives and Queen Elizabeth I are all on their way to Cheltenham!

A local charity’s fundraising sponsored walk is bringing together the past, present and future of Stroud and the surrounding areas – and they’re inviting today’s businesses to be part of the celebrations.