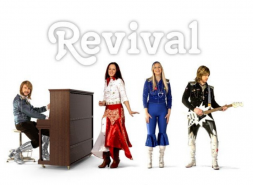 Relive the magic of an ABBA concert

It's time to dust off those platforms and dig out the flares...ABBA Revival are coming to Cirencester!

A cracking Easter in store at Birdland

Tewkesbury Borough will be hosting fine food and craft markets this weekend.

Cirencester Park Polo Club will open the doors to its members' restaurant and bar this season to everyone, starting with a charity pop-up lunch for Mother’s Day (Sunday, March 27).

Nine members of The Cotswold Art & Antique Dealers’ Association (CADA) are participating in the first Cotswolds Curated taking place from Saturday, April 2, to Sunday, April 10, in shops and galleries in Gloucestershire, Oxfordshire and Worcestershire.

The Barn Theatre in Cirencester is hosting a special event with Michael Morpurgo on Friday 25th March, to raise money for Michael and Clare Morpurgo’s charity Farms For City Children.

Three acclaimed artists will be performing at Tetbury Goods Shed on Saturday (March 19).

A spectacular double bill celebrating the music and life stories of two of the world’s most iconic female superstars is coming to Cheltenham.

Tomorrow (Friday, March 11) Craft Festival Cheltenham returns to the Town Hall for its fourth edition, with a hundred of the finest designer makers from across the UK exhibiting over three days.

The world’s finest musicians will make their way to Cheltenham Music Festival (8-16 July) as it welcomes audiences back to full capacity for the first time since 2019.

A new initiative which aims to capture the images of 100 inspiring local women is being launched to mark International Women’s Day, which takes place tomorrow (Tuesday).

This Easter, the Civil War is coming to Berkeley Castle!

Fund-raising concert for people of Ukraine

A special fund-raising concert for the people of Ukraine will take place at Chapel Arts in Cheltenham on Sunday, March 13th.

Anyone interested in photography or is a keen film buff will be excited to hear about “Live in Conversation” with Keith Hamshere during Broadway Arts Festival.

Craig Revel Horwood, the star of BBC1’s Strictly Come Dancing, is taking to the road with his debut solo tour!

For this year’s Stroud Film Festival, the nice people at the Museum in the Park have been digging through their past event archives.

A feast of well-known faces will be bringing their expert insights and advice to RHS Malvern Spring Festival this May.

If you think science is boring, think again! A science show in Tewkesbury features science like you have never seen it before.

Big Feastival is returning to the Cotswolds this August Bank Holiday, from 26-28 August, with an incredible line-up of music, food and family entertainment.

All aboard for a luxury train trip

Train fans in Gloucestershire can look forward to a luxurious trip aboard one of the world's poshest trains next month.

Illuminated Swim to make a splash at GL1 leisure centre

Swimmers are being offered a once-in-a-lifetime experience to escape into a sensory world, wrapped in colourful light and soothing sounds as part of the Bright Nights Festival.

A collaborative exhibition of work by local artist Abigail Waddell and photographer Stephen Shepherd opens at the Corinium Museum, Cirencester, on Friday (March 4).