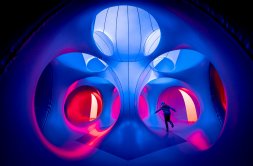 Summer Jam returned from a two-year break with a bang last weekend in Cheltenham.

Stroud’s community and conservation charity has a busy timetable of family-friendly events coming up this summer.

Making physical activity accessible for all

Everyone should have the opportunity to get physically active, no matter their age or ability.

The Brewery Quarter in Cheltenham is gearing up for its free family music festival, Summer Jam this weekend.

Remember a loved one with Longfield's Daisy Appeal

Following two successful ‘In Memory’ Appeals using metal flowers as a way for people to donate and remember a loved one, Longfield Community Hospice is launching a third appeal with its latest metal flower offering – a Michaelmas daisy.

Connect with your Cathedral this August

Gloucester Cathedral has a packed programme of family-friendly events and activities in August, which aim to promote mental and physical wellbeing for all

Three days of classic diesel traction on the GWSR

The Gloucestershire Warwickshire Steam Railway (GWSR) will be operating seven historic diesel locomotives on its 14-mile railway between Cheltenham Racecourse and Broadway this coming weekend (July 29-31).

It's Summer at the National Waterways Museum

Summer sails into the National Waterways Museum, Gloucester, on a wave of wellbeing later this month.

No Child Left Behind launches Summer of Play 2022

This summer, a host of fun events and activities aimed at giving children and young people the space, time and freedom to play, returns to Cheltenham as part of the Summer of Play 2022.

Majesty - a tribute to Queen are back at the Bacon!

Spend an Afternoon at the Proms with Flowers Band

This Sunday (July 24), spend an Afternoon at the Proms with Flowers Band at the Bacon Theatre in Cheltenham.

A family-friendly, witty and wacky production of Shakespeare's classic A Midsummer Night’s Dream is touring round Gloucestershire venues this summer.

There’s plenty to do at Newark Park in Gloucestershire this summer from lawn games and trails to outdoor theatre.

A colony of king penguins at a wildlife park in the Cotswolds are avoiding the heat by chilling out on giant ice blocks as temperatures near record levels in the UK.

For six weeks this summer it’s music all the way for pre-teens and teens at the playlist exercise sessions.

A total of 21 nations will head to Hartpury University and Hartpury College to compete in the FEI Dressage and Eventing European Championships for Young Riders (YR) and Juniors (JR) 2022 next week (25-31 July).

Festival of Archaeology at Corinium Museum

Corinium Museum in Cirencester is celebrating its archaeological past with a series of events for the national CBA Festival of Archaeology.

With the summer holidays approaching, make the most of the great outdoors at Westonbirt, The National Arboretum.

Throughout the summer holidays, Snowshill Manor, near Broadway in Gloucestershire and cared for by the National Trust, will be celebrating creativity with daily family activities.

Gloucester Rhythm and Blues Festival returns to delight music fans across six days at the end of July.

Fun and games at the Spring Centre Summer Fayre

A Gloucestershire-based centre which cares for children and young adults with disabilities and special needs is holding its Summer Fayre this Saturday (July 16).

Rapunzel lets her hair down this summer

Escape into the open-air this summer with Rapunzel – an exhilarating, heart-warming production about one girl’s longing to break free from her imposed lockdown and explore the world outside.

Dom Joly to return to Cirencester with new UK tour

Dom Joly, the multi-award winning creator of Trigger Happy TV and author of popular travel books, is bringing his first UK tour since 2011 to Cirencester.

Stroud Country Show is returning to Stratford Park on Saturday, July 16th as a celebration of the talents, skills and unique character of the communities of the Stroud Valleys.

Slimbridge Wetland Centre has scored 97 per cent in its recent VAQAS (VisitEngland Quality Assured Visitor Attraction) assessment, again improving on previous high scores with a 1 per cent increase from the 2021 assessment.