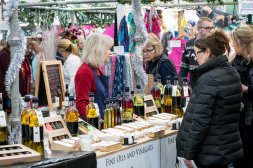 The original luxury Christmas fair in the Cotswolds

Cotswold residents in search of the perfect gift for a loved one this festive season will have plenty of inspiration at hand thanks to the Mary Howard Christmas Fair.

Churches gearing up for The Big Quiz Night

Quiz buffs around Gloucestershire are set to take part in the largest multi-venue general knowledge quiz ever held in the UK.

The Spitfire Sisters are an internationally acclaimed vintage-style musical group with vocal harmony at their heart.

A concert of music poetry and prose remembering The Great War 1914-1918 will take place in St Lawrence Church, Lechlade, on Saturday (October 27).

A new comedy version of Sherlock Holmes: Hound of the Baskervilles opens at the Barn Theatre in Cirencester tonight (Wednesday) for a month-long run.

The Cheltenham Gin Festival showcases over 75 varieties of the very finest gins, most not available on the High Street, from the Four Nations of the UK, plus some fine gins from around the world.

Irish duo Foster & Allen still as fresh as ever

The story of Foster & Allen began back in the 1970s when Mick and Tony were playing in country music bands around Ireland.

During October half-term Gloucester Cathedral will be hosting three days of free art activities as part of the international Big Draw initiative.

'One of the greatest hip-hop artists of all time'

There's a rare opportunity to see legendary guitarist and singer-songwriter Robert Cray in Cheltenham next week.

Comedy Club ready to sock it to you!

The Goods Shed Comedy Club returns with more hilarity, mirth and merriment than you can shake a (rather large) funny stick at!

Quest for the golden apples is back

The team at Painswick's historic Rococo Garden is celebrating all things autumn with a Family Festival of seasonal delights this weekend.

Cathedral marks centenary of the end of World War One

Gloucester Cathedral has announced a programme of services and events to mark Armistice 2018 and the Centenary of the end of World War One.

Half-term is next week in Gloucestershire and for parents and children looking for something to do, Stroud District Council attractions have lined up a wide range of activities.

Always a pleasure to hear the Biscuit Boys

2018 sees King Pleasure & The Biscuit Boys celebrate a remarkable 30 years on the road - and on October 27 they will be appearing in Stroud.

The Royal Ballet's Mayerling screened live to the Corinium Cinema

The thrilling ballet Mayerling will be broadcast live from the Royal Opera House in London’s world-famous Covent Garden to Cirencester's Corinium Museum cinema on Sunday (October 21).

Spooky fun to be had at Halloween Land

There will be cauldrons of spooky fun to be had at Cotswold Farm Park's Halloween Land area, which opens on Thursday (October 18).

See what Bourton has to offer at The Funstival

The Funstival is a new venture in Bourton-on-the-Water, celebrating the local community and showcasing the activities available locally for people living in and around the village.

Without doubt the most explosive 60s show touring the UK returns to Cheltenham for one night only this Thursday (October 18).

Avian myths and legends at Birdland

Visitors to Birdland Park & Gardens will be able to let their imagination fly away with them during the October half-term holidays.

Stuck for something to do? Take a look through our top picks of going on in and around the county this weekend.

Visitors to Sudeley Castle this weekend can see an archaeological dig in progress.

A warm welcome awaits you at Stroud Choral Society’s Autumn concert performance of Dvořák's Requiem at Tewkesbury Abbey on Saturday, November 17, at 7pm.

X Factor winners Rak-Su are set to join Olly Murs as his special guests on his 2019 UK arena tour which takes in Gloucester's Kingsholm Stadium on Friday, June 7.

Halloween fun for your little monsters to enjoy

Join Taurus Crafts this Autumn half-term for their most 'Spooktacular' yet, with activities every day from October 20 until November 4.

Piano duo are an ensemble of rare distinction

Since their formation in 2011, the piano duo of Julian Jacobson and Mariko Brown has established itself as an ensemble of rare distinction, vitality and originality.

Spend an evening with the King!

Darren Boyce is a truly talented performer, with vocals to match and that unmistakable Elvis Presley tone.

The immensely popular Enchanted Christmas event is returning to the National Arboretum at Westonbirt this December.

Lechlade's Serenade and Sandwiches series continues at 12 noon on Friday (October 12) with classical pianist Paul Turner, who trained at the Royal Academy of Music in London.

Steam along to food and drink fayre

The Gloucestershire Warwickshire Steam Railway's third Cotswolds Food and Drink Fayre is set to whet appetites over the weekend of October 20-21, at Toddington station.

80s crooner Paul Young is back on tour

Everyone’s favourite 80s crooner Paul Young is back on tour, performing his much-loved album ‘No Parlez’ in celebration of 35 years since its release.

The weather isn’t looking too great this weekend so we’ve compiled a list of things going on around the county to keep you occupied.

Get up close and personal with national treasure Esther

To celebrate her fiftieth year in broadcasting, award-winning broadcasting legend, philanthropist and campaigner, Dame Esther Rantzen is coming towards the end of her debut live UK tour, That's Life.

With the annual Cropredy Festival in the rear-view mirror, the original folk-rock band Fairport Convention refuse to let the grass grow.

Imagine getting married in a castle

Eastnor Castle is opening its very large doors for a wedding showcase this Sunday (October 7) - and everyone is invited.

The Dursley Male Voice Choir will be performing a varied programme at Tetbury Goods Shed on October 12 in a concert featuring mezzo soprano Elisabeth Irvine.

Mop ready to roll into town

Tewkesbury Mop Fair, which is the largest street fair in Gloucestershire, rolls into town next week.

With appearances performing on ITV’s This Morning and The Paul O’Grady Show, The Barricade Boys have secured their place as theatre-land’s newest musical theatre concert show.

A magical evening of music is being staged in Stroud to celebrate two landmark anniversaries.