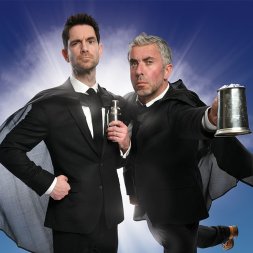 The Down for the Count Swing Orchestra will bring the sounds of the Swing Era back to life for Tewkesbury audiences at a special performance at the Roses Theatre on Friday, February 7, as part of a 15-date UK tour.

Volunteers are opening the doors at a Gloucestershire hospice next month to give the one-off chance to view the beautiful snowdrop displays around its historic grounds.

The BBC has announced it is putting on a second preview screening of the new series of This Country due to “unprecedented demand”.

Tribute to The Four Seasons in one evening

Bye Bye Baby is more than your average tribute group. They deliver a full theatre show covering the journey of the Four Seasons from the very beginning up until the Disco era and the Rock and Roll Hall of Fame.

A trio of star names are set to appear in a national tour of Harold Pinter's The Birthday Party, which is opening at the Everyman Theatre in Cheltenham on Thursday, April 2.

It's an Oscar Wilde classic...but not as you know it!

Oscar Wilde’s cherished ‘The Importance of Being Earnest’ is returning to the Barn Theatre after its successful 2019 run, but not quite as you may know it.

Rag‘n’Bone Man has announced a gig at Westonbirt Arboretum as part of Forest Live, the summer concert series presented by Forestry England.

Treasures from one of Britain's greatest collections up for auction

Historic pieces from one of Britain’s greatest estates will be offered in Chorley’s Attic Sale in Gloucestershire on Tuesday, January 28.

World number one Michael Van Gerwen will headline a high-quality field when Cheltenham’s annual arrows returns to the racecourse on Friday, February 21.

Join in with a community litter-pick

Mitch Benn's Ten Songs to Save the World

One broken world and ten funny songs to fix it. Mitch Benn spreads insight and laughs in equal measure.

Top five things to do this weekend

After our first full week back at work, we're all looking forward to something fun this weekend.

The panto season just keeps on going in Gloucestershire as the Leckhampton Players are gearing up for their take on Dick Whittington at the end of this month.